Today we announce the first BookStack feature release of 2022. This brings updates & features to the WYSIWYG editor, user management API endpoints and much more. In this post we cover features added in this release in addition to some notable changes in the v21.12 patch releases.

The main work for this release has been focused on the WYSIWYG editor. The library used by BookStack, TinyMCE, has been updated to a much newer version and we’ve reorganized the connected BookStack codebase.

In terms of usage, everything should remain familiar. The most apparent changes are to the toolbar:

The styling and size of the buttons has changed to be a little more modern and easier to use. The location of some buttons have been moved, with lesser-used controls being placed behind overflow menus to keep the default toolbar focused & simple. Code formatting options have been moved out from the block formats dropdown to instead be inline & insert options. A new help “(?)” toolbar button has been added to show editor license information in addition providing a handy list of available shortcuts.

For those using BookStack in a language other than English, the editor is now linked to our translation system meaning that, where language files have been updated, controls within the editor should now be in your preferred language:

You’ll probably notice other usability and speed improvements gained by the more modern underlying library, otherwise all existing features and abilities should remain the same.

Within this release cycle I did spend some time exploring alternative options but I found that moving away from TinyMCE would be quite a painful process for us so instead I chose a more stable path for now.

For the first time in while we’ve added a new content type to the WYSIWYG editor: The collapsible content block. These blocks allow the grouping of multiple other blocks of content into a container that can be toggled open by the reader.

These blocks are open within the editor and closed when viewed on a page. They can be toggled closed within the editor for cleaner editing or previewing purposes. The label used on the toggle bar can be edited as desired. When page content is exported these sections are still represented although in an open state so that content is visible.

Behind the scenes these blocks use the HTML standard <details>/<summary> elements as described on MDN here. Markdown users have been able to use these within BookStack, using the HTML representation, but the inclusion in the WYSIWYG editor helps align abilities.

The addition of these blocks adds some great potential use-cases to empower your documentation; From cleaning up large detailed sections or code-blocks, to being able to provide spoiler-free question and answer style content:

In this release the API receives another set of abilities. There are new endpoints for user listing, creation, updating and deletion. All of these actions require “Manage Users” role permissions by the API client user. 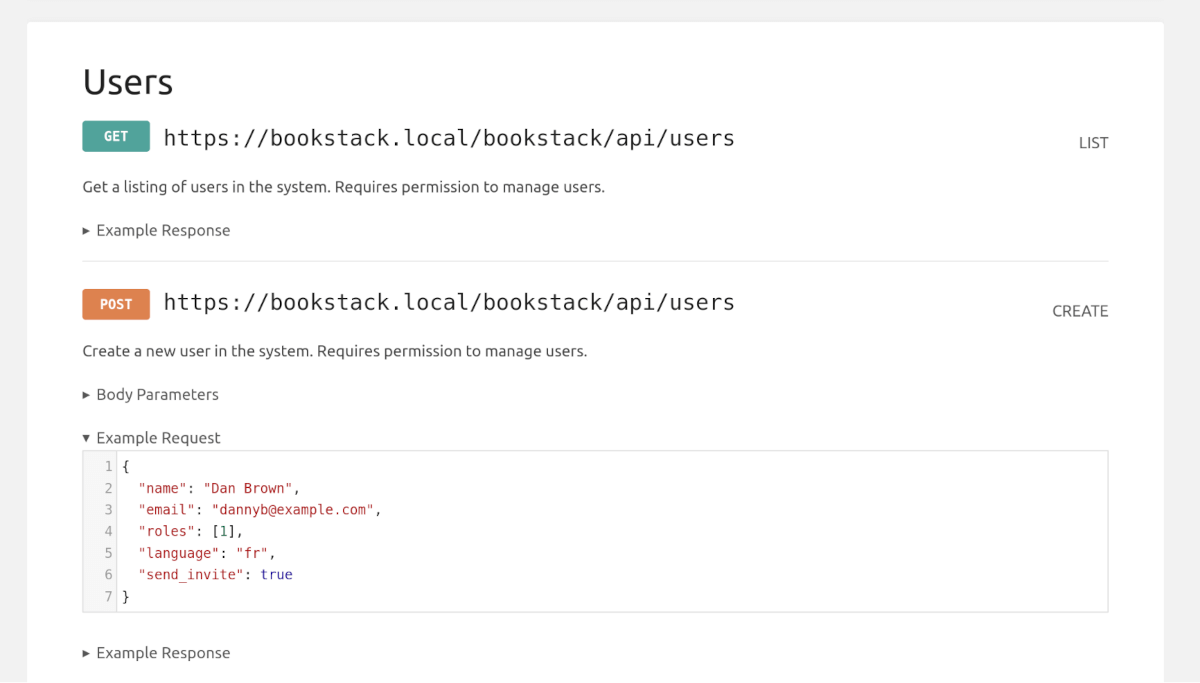 These new endpoints unlock a whole new avenue for automated and programmatic user management in addition to allowing bulk operations to be script-able. Need to migrate thousands of users into BookStack? Now it’s possible!

You can find more detail for these endpoints via our demo site API docs.

BookStack v21.12 added support for outgoing webhooks. In v.21.12.1 this system was enhanced with the following additions/changes:

These changes should greatly improve the debugging process, if needed, when setting up webhooks while allowing them to be used in a much more reliable manner.

As of v21.12.4 you can now select a preferred language when creating a new user in the system:

Upon showing the correct language upon first login, this means that the new user can now receive the invitation email in the most suitable language, instead of it being based on the language of the admin creating the user, which was not very intuitive.

A new .env option was added in v21.12.4 to provide control over PDF export page size. By default Bookstack will use an A4 page size but this can be changed to “US Letter” size by adding the following to your .env file:

In BookStack v21.12.3 the “Recently Updated Pages” view, accessed via the homepage card of the same name, was enhanced with some additional context-specific details:

Special thanks to @Julesdevops for helping to evolve this area of the application.

As is common, our remarkable translators have continued their great work to keep the language strings up to date. This release added a bulk-load of new terms, for use within the editor, so a particularly big thanks from me to those that have translated all those extra terms since inclusion. The contributors and their updates made, since the initial v21.12 release, are as follows:

For those closer to the BookStack code, within the last release we’ve changed the default development branch name from master to development. This was to add clarity to the branch’s purpose while avoiding any potential concerns of offence.

If you have any existing links or branch references, GitHub should redirect and/or warn about this change upon interaction.

This release was the first in working upon our “Editor Alignment & Review” road-map item. For this next feature release I’ll be looking to get deeper into this road-map item to align markdown & wysiwyg feature-sets and potentially offer easier traversal between these editor options.

With the updates made to the WYSIWYG editor I think it’s likely we’ll have a flurry of patch releases to enhance features and patch issues that pop up from wider usage.