We kick of this optimistic year with BookStack v0.31 which includes some great additions & updates to existing functionality including a new recycle bin system, controllable item ownership, audit log changes, page API endpoints and much more.

Just to note, There were a few security releases for v0.30. If you’re not upgrading from v0.30.7 be sure to read through the version specific notes on the updates page.

Ever had an accidental deletion in your instance that you needed to undo? Now you can, without having to restore a database backup, using the new recycle bin system. When you delete a shelf, book, chapter or page they’ll now be sent to the recycle bin: 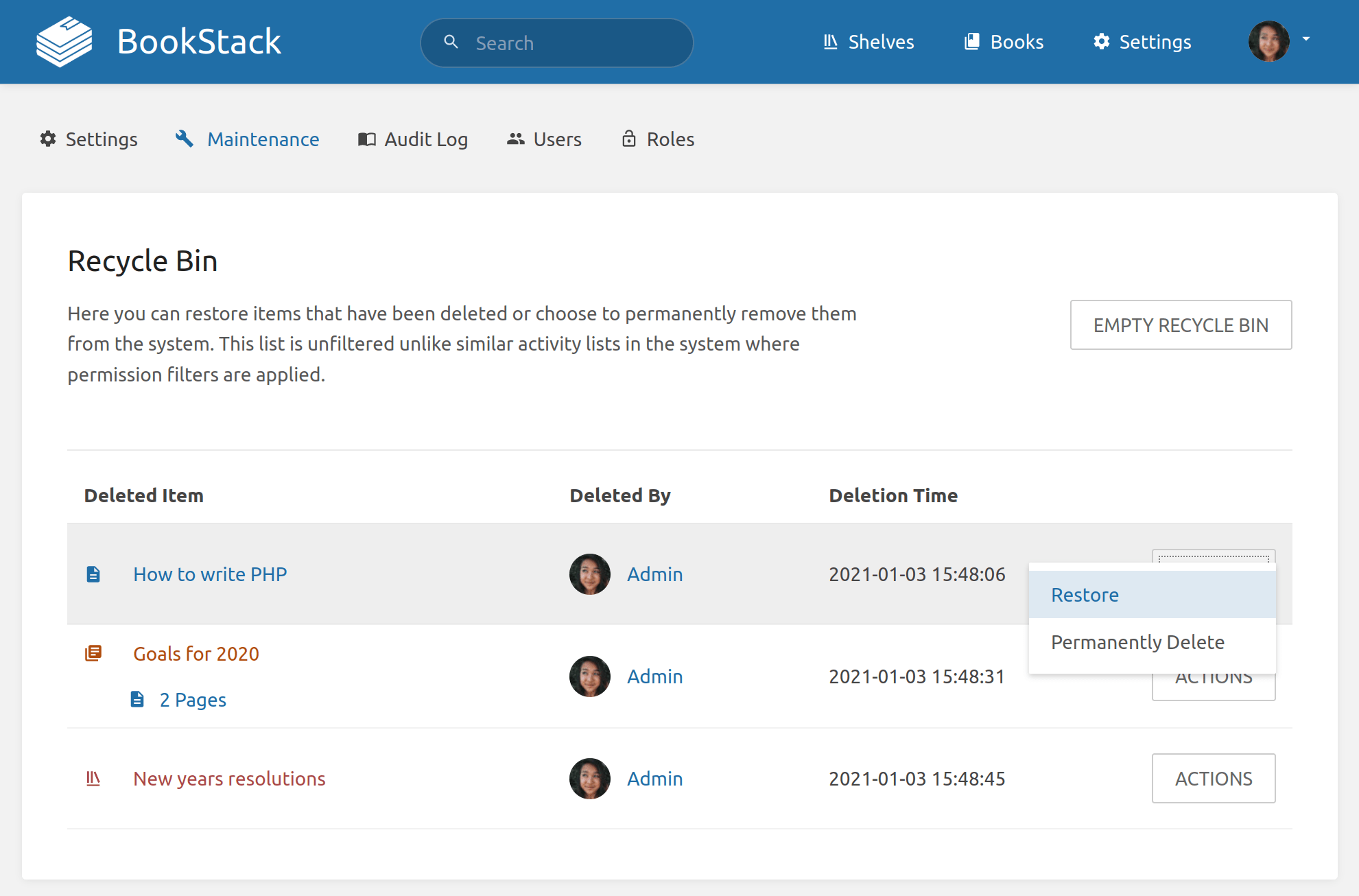 The recycle bin can be accessed via the maintenance page where you’ll also be provided with an overview of what is currently in the bin:

Since March in 2016 BookStack has had permissions available that permit the owner of content to make certain actions, For scenarios such as “user is able to create pages within their own books”. While potentially useful, these permissions were hard to use in practice since the owner would always simply be the creator.

In v0.31 the owner is now a separately tracked user, defaulting to the creator. The owner can be changed on the permissions view of a shelf, book, chapter or page as shown below:

When you delete a user, you’ll now be given the option to transfer ownership to another user if required.

These changes should make it much easier to setup scenarios where you have user-owned books where they can only create, edit and delete within their own book.

With the last feature release introducing the audit log, time has been spent this release cycle on expanding the tracked activities to include many more events such as logins, user-management actions and settings update actions. 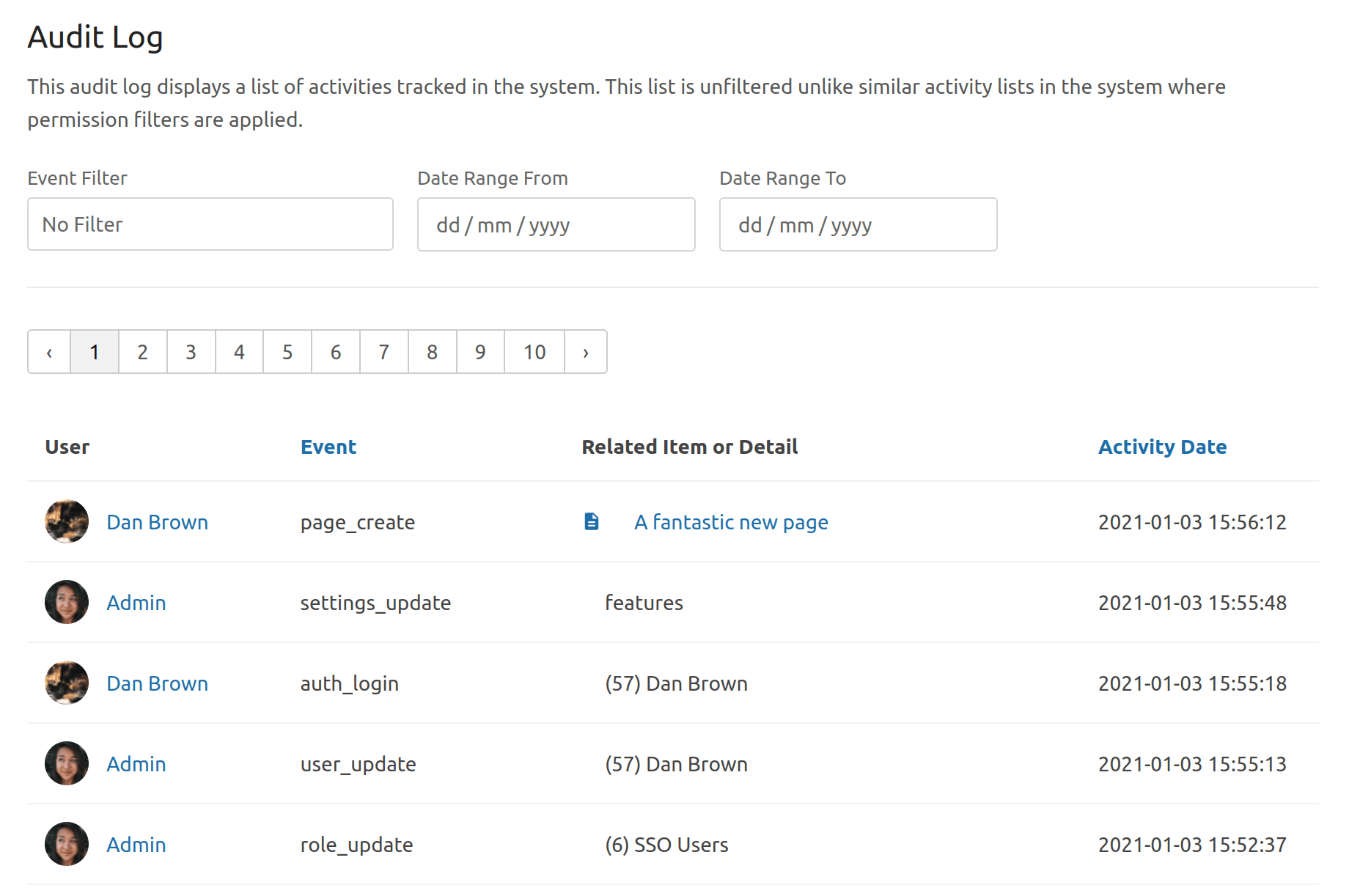 A common requirement when managing users is to see who’s inactive and therefore might need to be removed from the system. This was previously tricky to do without direct database queries or careful manual monitoring but now in v0.31 the latest activity will now be shown on the users list within a sortable column: 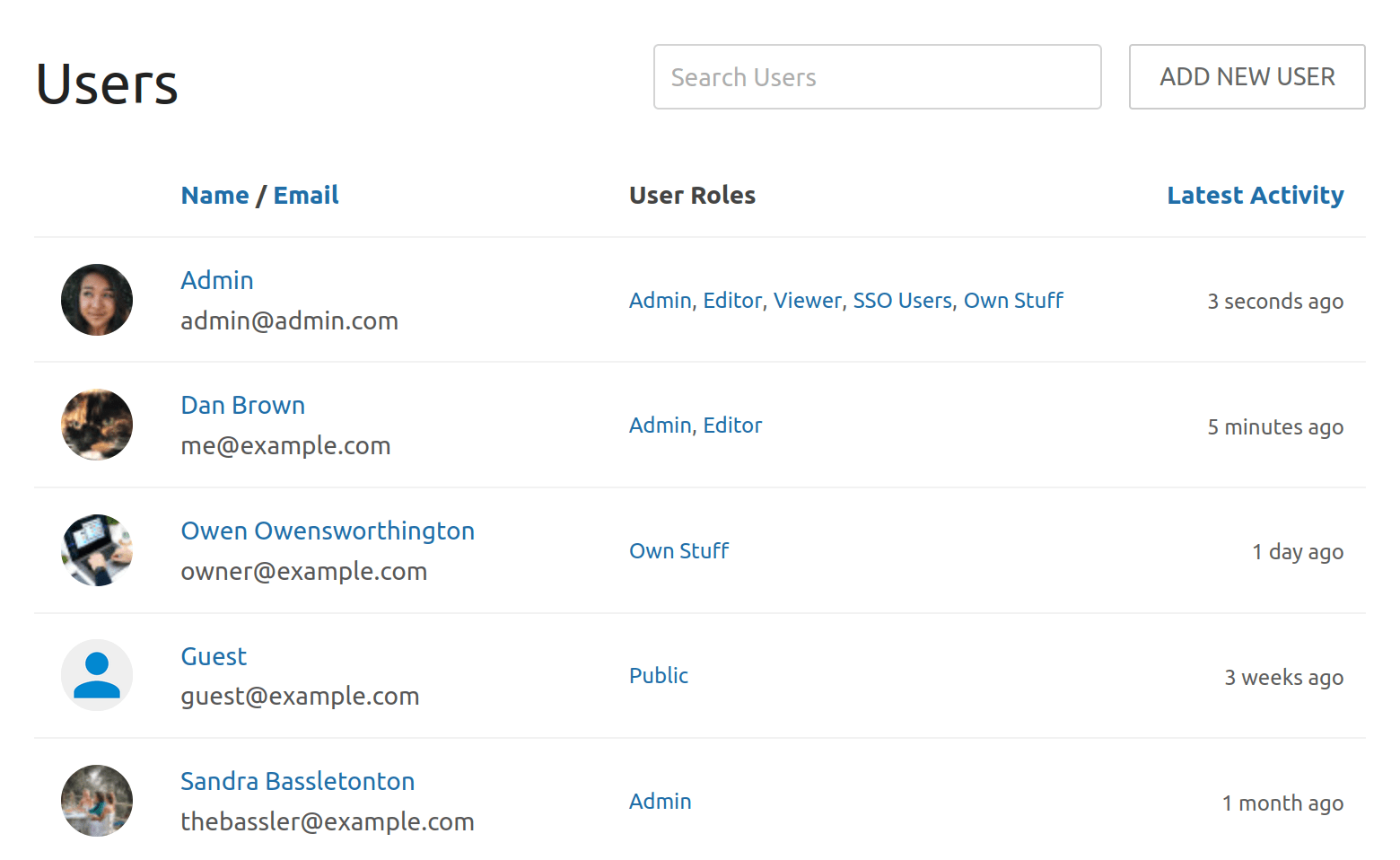 Since you can sort by this column you can quickly find inactive users. Note, the latest activity date reflected is based on the activity tracked in the audit-log, so does not include view/read only events but should include anything that counts as a modification. Activities made before v0.31 may not be reflected.

When viewing a revision you have the option to preview pages. This was done through the gathercontent/htmldiff which was great but had not been supported in a while and required the PHP Tidy extension which could be tricky to locate and install on some systems. 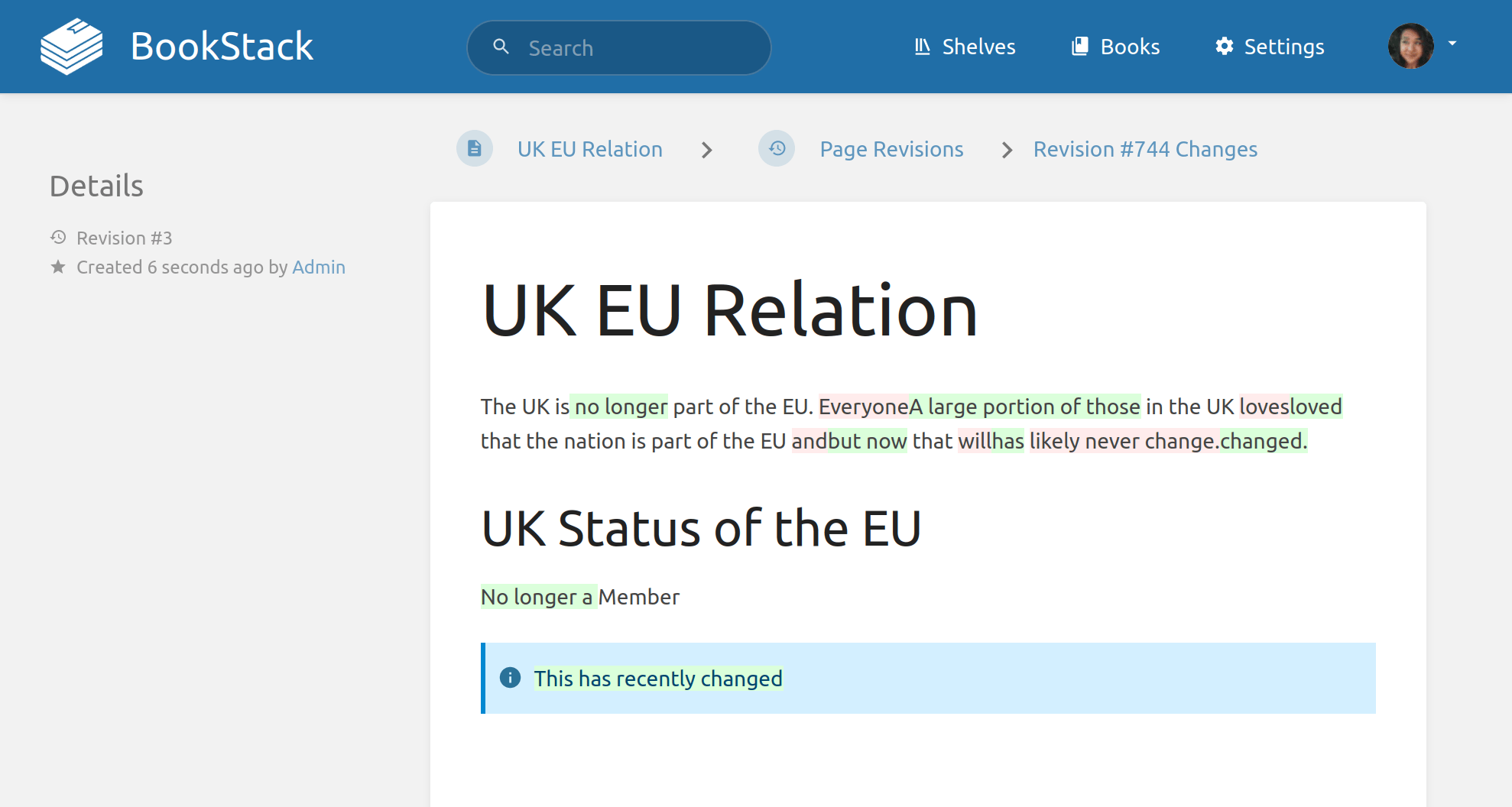 This new library does not have the PHP Tidy extension requirement so should make installation & maintenance easier for some. From my testing this new library has appeared to work without issue but we will have to see how it performs in wider use.

This release brings page endpoints to the REST API. This completes the initial phase of the API now that we have CRUD endpoints for shelves, books, chapters and pages. 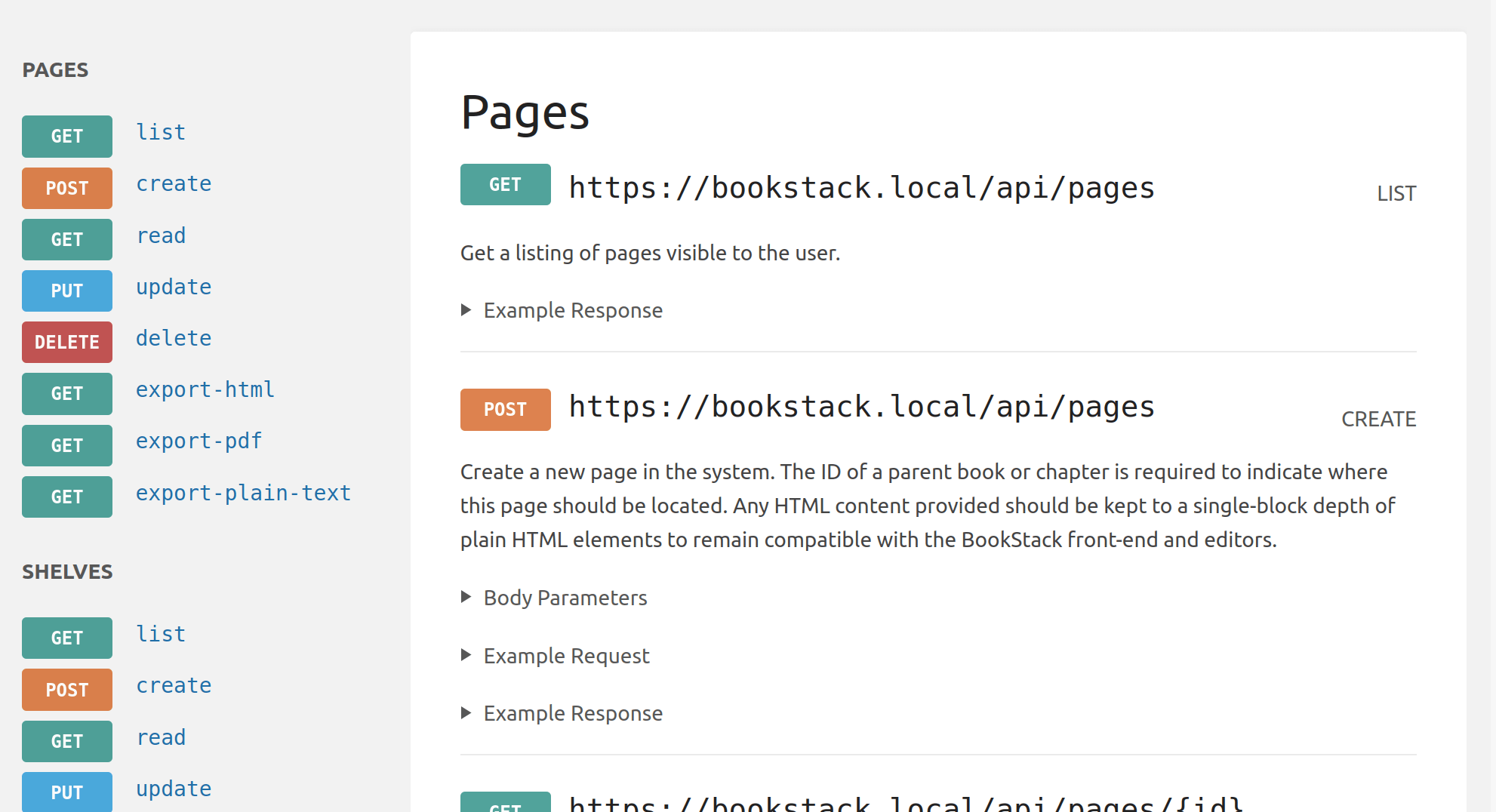 Now the core content parts are in place, I’m open to GitHub issues being created to request specific features or endpoints so further actions can be performed.

To support usage of the API, I’ve setup a new BookStack api-scripts repository on GitHub: https://github.com/BookStackApp/api-scripts. This will be a collection of useful scripts I, or others, create as examples or for specific tasks. These can be used directly, or as a base/guide to create other scripts.

Over the last 6 months some of the mainstream browsers have added additional protections for cookies, restricting the default usage within a third-party context. For BookStack, this meant that access through an iframe may not fully work due to cookies being blocked.

In v0.31, we’ve added additional controls to prevent usage within an iframe. CSP frame-ancestors headers will now be set, and used by modern browsers, to ensure it will only load within an iframe where the parent page is on the same host as BookStack.

A new ALLOWED_IFRAME_HOSTS option, to be used in the .env file, can be used to allow iframe access for certain hosts. This can be used like so:

Setting this option will also adjust cookie security so that they can be set in a third-party context, and hence work when inside an iframe.

Details of this have been added to the security page of the docs.

Big thanks to @Swoy who as provided Norwegian translations to BookStack for this release. In addition, the below list shows the fantastic translators that have made changes since v0.30 and the languages they’ve updated:

Over the last few months we’ve had a good number of authentication-based pull requests, in addition to some others, which I’ve been somewhat ignoring so I’ll look to spend some time reviewing a few of those.

Now we have the core elements of the API integrated we’ll now see what other features people may need. I’m imagining we’d add a few endpoints each future release for a while.

With the API base down and the activity system fleshed out, now may be a good time to implement an outbound web-hook system. I’ll likely create an implementation proposal so I can ensure we’d be covering the main use-cases required.

PHP 8 support is another thing I’ll look to work on over the next release cycle. Some work has been put into this but, due to scale of changes in PHP 8 and the rate that some required packages move at, it’s a trickier process than previous new PHP versions.