On this BookStack site I have been using Google Analytics to track visitor metrics. While not crucial to know, it’s generally useful to have an idea of the target audience, current popularity and be aware of any visitor spikes. For the email updates and email security alerts I’ve been using Mailchimp. This post explains the move to more privacy aware alternatives.

BookStack, being an open source self-hostable platform, will have an audience that’s generally quite privacy aware. Google is generally seen as an ever-growing threat to privacy on the internet. Google Analytics, as a service to track website visitor metrics, is very popular and well used since it’s available without paying and provides a very good amount of data hence was my choice for this site until now but I’ve had a growing unease sending visitor’s details to Google without their consent. I did use it without cookie usage while choosing to anonymise IP addresses but it would still effectively contribute to Google’s own data usage which may be misaligned with the wishes of visitors.

As an alternative, I’ve set-up a self-hosted instance of Plausible. I was initially put off with its simplicity, compared to Google Analytics; I mean it has way fewer menus, graphs, pages and options so it must be inferior right? But I thought about the questions I want answered from such a service:

Plausible answers all of these, and it does so directly, in an easy and beautiful UI. It’s simplicity actually makes it better for the questions I need answered since I no longer need to navigate through the slow, confusing interface that Google Analytics presents. It’s all just there in a single view. 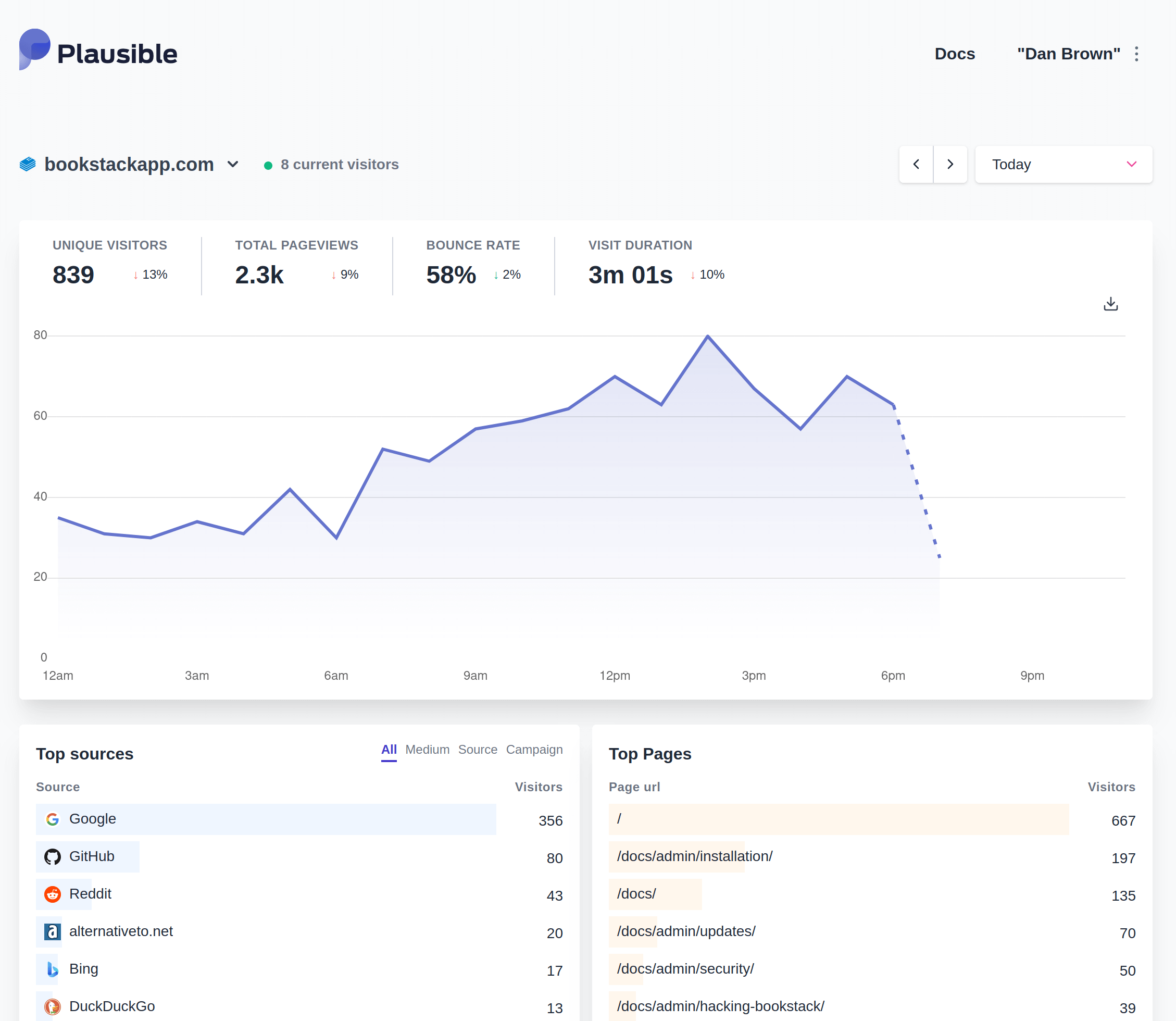 Plausible offer paid, hosted plans but I’ve chosen to self-host the service to keep costs minimal and so that my visitor’s data is not held by a third-party. That said, I still want to support the project which can be done as a self-hoster via their GitHub sponsors page. Setup was a straight-forward process using their docker configuration and it’s been stable so far. I ran it alongside Google Analytics for a few days to check if figures aligned. The numbers were slightly higher (~5 to 10% or so) on the Plausible side which I’d guess may be down to visitors blocking Google scripts/domains.

One of my favourite features of Plausible is that it’s really easy to make the dashboard public which is something I’ve often wanted to do with Google Analytics in the interest of transparency. The BookStack dashboard can be seen at https://analytics.bookstackapp.com/bookstackapp.com.

As mentioned in the intro, I’ve been using Mailchimp to send newsletter updates and security alerts. To be honest, It’s worked fairly well; Their interface is generally pleasant, it was cost-free for my usage, it sent the emails without issue. That said, there were two things I was not a fan of:

The second point really irked me, especially since you could choose to disable it during campaign setup. To be fair, I did not raise it with them but based on this line from their support page:

It appears that user privacy may be a paid feature.

This tracking was particularly unappealing on our plaintext security updates. It’s not obvious at all where the links actually lead to:

When looking around for alternatives, I found lots of great options including:

Unfortunately though many of these lacked an auto-RSS-send feature and/or appeared too complex for the focused use-case I had in mind so, with some extra Christmas holiday time, I put together my own app which I’ve called MailBag. 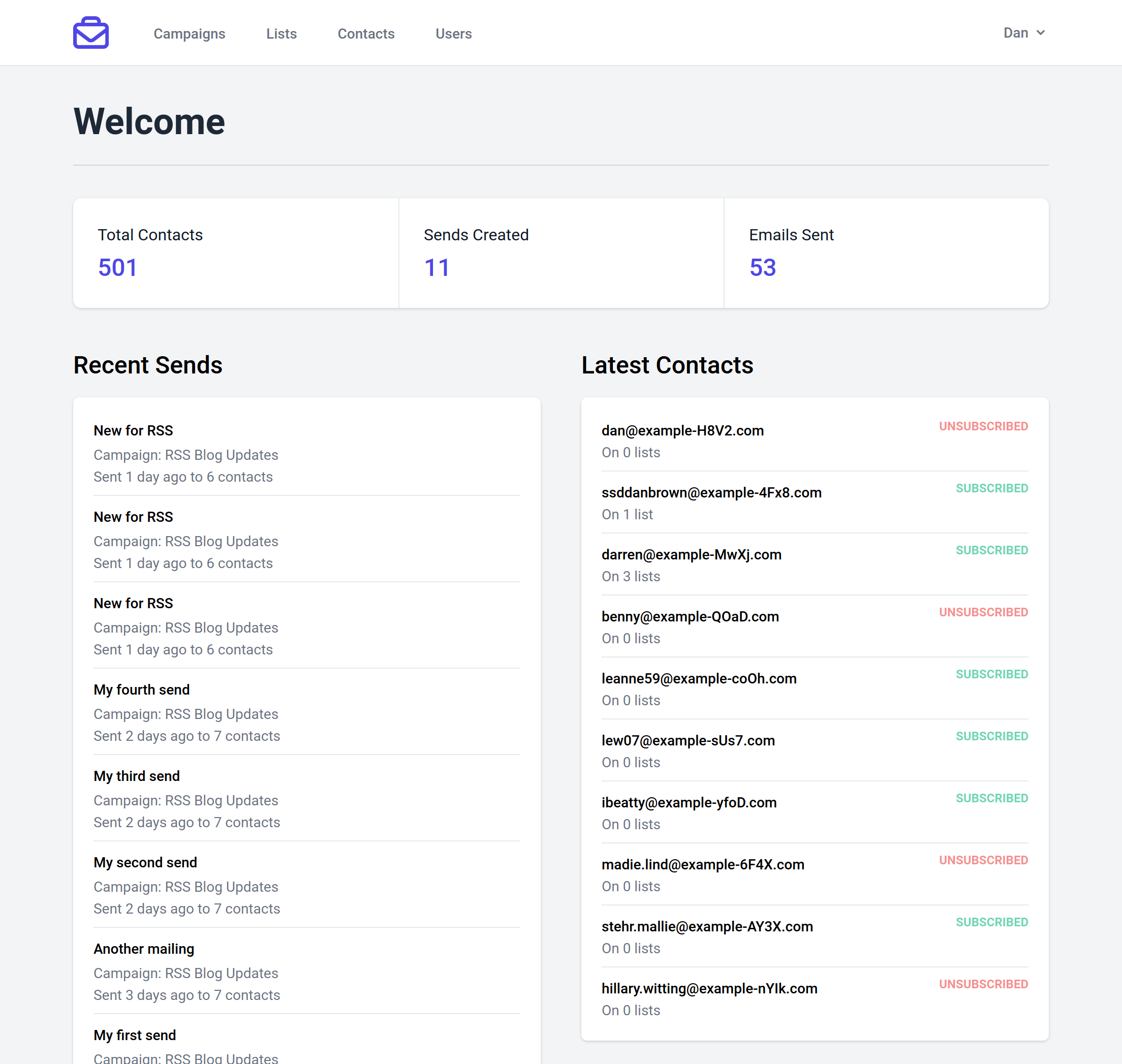 This is a purposefully very simple app and has lots of limitations, as listed in the readme, but it does what I need it to while providing me an opportunity to work on something fresh for a change to sharpen some development skills. There is no open/click tracking support; No HTML email support.

Over the next month or so I’ll be migrating the existing contact lists from Mailchimp. I’ll send out emails to existing subscribers as a advisory and to provide an opportunity to opt-out of the migration beforehand. The subscribe links, found at the bottom of all posts here, have been updated to the MailBag instance since I’ll be running both systems side-by-side for a while.