A few times recently people have asked how they can get involved and help BookStack so I thought I’d formalize my response into this blog post. While the below is my view in regards to BookStack contributions, it will likely apply to many open source projects

This is one of the most direct ways to get involved with an open source project, while potentially being the most difficult and intimidating. I remember making my first pull request (PR) to an open source project on GitHub. I put a fair amount of work in to provide a much requested feature, opened the PR with an explanation, and there it sat for 6 months before it was closed without comment or reasoning.

The trouble with contributing code is that every project is different, with a different process, with different maintainers that have different visions and opinions. From maintaining BookStack I’ve come to understand the challenges from a maintainer point of view. It can feel really bad to reject someone’s work, after they’ve spent time on something, and it can be time consuming to guide someone through getting their contribution into an acceptable state.

When looking to contribute code to a project, this is the general process I’d advise:

If you’re skilled with fluency in multiple languages, contributing translation text can be a massive help. Translations within BookStack help the project be accessible to a much wider audience. Apart from a memorized French speech about “Family Guy” (Or “Les Griffins”) I don’t know much outside of English but luckily a bunch of wonderful folks in our community keep BookStack translated in, at the time of writing, 36 language variants. 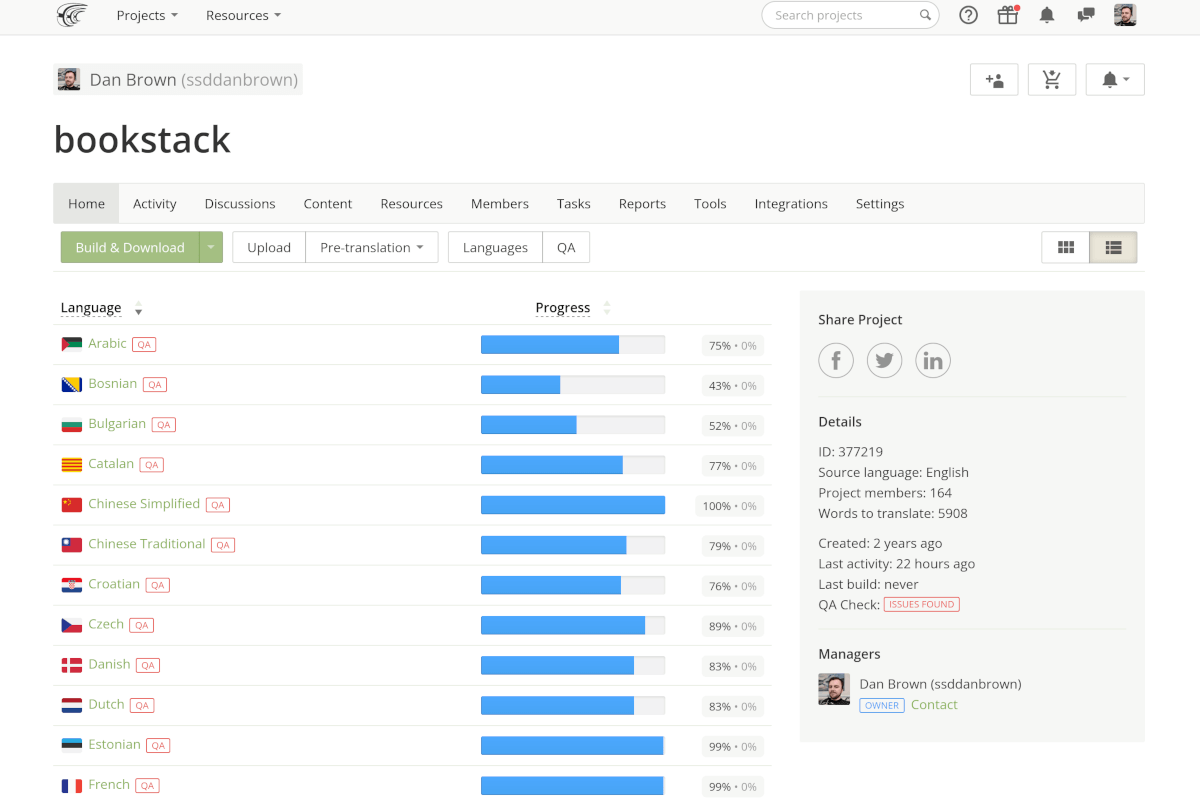 You often don’t need to have code skills to help with translating. Sometimes you’ll need to edit text files otherwise it’s common for projects to use a platform that provides an easier-to-use interface. Within BookStack we use Crowdin as our translation platform of choice.

When maintaining a project like BookStack, GitHub issues can consume a large amount of time. Our own issues list is comprised of:

We utilise different entry forms for these different categories to tag up the issues appropriately and attempt to get the needed information although that’s not always provided.

Support requests are probably the easiest to help with if you’re familiar with the technologies and environments where the project may run. Requesting vital or missing details, guiding the issue creator to the relevant documentation, or providing options & next steps to attempt resolution, are all good first steps that can help move things forward and save time for the maintainers.

With feature requests, it can be useful to provide perspective and add to the discussion for ideas. Sometimes it’s just a case of showing the issue creator alternative paths to their desired outcome. It’s quite common, especially by more technical users, that feature requests are opened requesting a certain implementation rather than stating their intended benefit purpose. For example: Requesting “Add a header bar link to page X” instead of “Provide faster access to page X from any location, since this would benefit Y”. A request for a specific implementation can keep you blind to better alternatives to reaching the same outcome. If this occurs, it can be very useful to communicate with the issue creator to understand that actual desire behind their implementation request. Even if a feature is requested for something that you would not desire, it can be useful to know from a maintainer perspective if a request is something that would go unused in your environment and hence may only add as extra complexity/clutter.

Bug reports can be very useful to a maintainer to create a more stable and issue-free platform but they’re not always provided in an ideal format, even when we have measures in place to request certain details. Upon that, sometimes bug reports are opened for elements that are in reality a matter of opinion or based upon false expectations. Validating and confirming re-production of issues can be a massive help and speed up the process for someone to get onto fixing the fundamental issue/bug.

Finally, there’s general issue management. Reporting issues that are no longer relevant, or advising of potential duplication, can save time and keep the issues list down.

Many open source projects don’t have the full QA capabilities of commercial offerings. While I attempt to write automated tests where possible, and manually test each logical scenario, you can’t catch absolutely everything and it’s commonplace that I’d be the only tester for a new feature being released.

Reporting bugs you come across in production can be very useful, just ensure you’re running the latest version (since things may have already been fixed) and provide as much detail as possible to replicate the bug (Including environment details such as browser used, operating system etc…).

Testing pre-release developments can be valuable to ensure another use-case has been tested before changes are shipped to production, but communicate with the maintainers before attempting this since the pre-release environment may be knowingly unstable and you may just end up wasting your own time in addition to the maintainer’s. Probably best to find some recent changes, then reach out to see if they’re ready for testing & feedback.

An alternative form of bug reporting is security issue reporting. Security is of course quite vital to most projects. It’s quite common for services & projects to have security “bug bounties” where you can be rewarded money for discovering and reporting vulnerabilities. In BookStack I’ve dealt with many submissions via huntr.dev which has led to many issues being reported and fixed, with the reporters receiving significant monetary gain for their discovery without being at cost to us. Upon that they have also rewarded me for patching many of the vulnerabilities found. 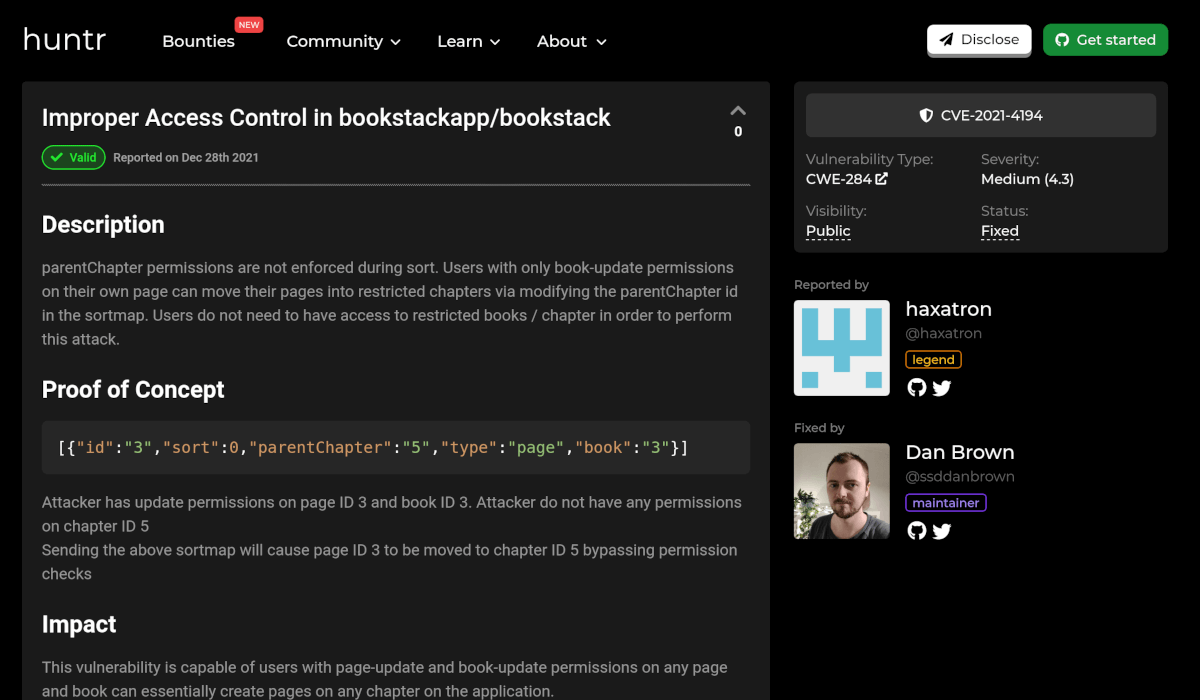 If going down the security route, many open source projects will have their own procedures and classifications when it comes to reporting security vulnerabilities. Look within the project readme or for a security.md file like the one we have in BookStack.

Text and video media can have a great benefit on a project. Not only do they help in spreading the word, they can provide a massive morale boost. Seeing people take the time to create videos about BookStack creates a great sense of pride to help me continue on the project, while often showcasing an alternative viewpoint in terms of thoughts and usage of the platform. Upon their emotional and network affect, this kind of media can just generally help in terms of providing guidance to new users. Here are two videos as examples:

Both of these provide very useful visual guidance relating to specific hosting platforms that I wouldn’t cover myself, hence helping improve accessibility to the project for a sizable chunk of users.

Get Involved on Discord

We have a discord server to host quick and informal discussion for BookStack. People often pop in to request support, discuss ideas or talk about ways to do things. Supporting others and being part of the conversation can help build the sense of community within the project and help BookStack be something more than just its codebase.

Simply sharing the project around can provide a positive affect on a project. I use f5bot to track BookStack mentions on Reddit & Hacker News, for which I see multiple almost daily which again can provide a great morale boost. In addition, links posted to the project is great for SEO, to help us rank up in search engine results and therefore reach a wider audience.

On thing to be careful of is sharing the project in the incorrect context or over-sharing. If spam-like behavior is seen then it can cause resentment towards the project. For this reason I strongly limit how often I personally post the project, as a new submission, on Reddit.

Financial contributions are used differently depending on the project. For the majority of BookStack’s development I avoided receiving donations to prevent getting money involved in the project. I then changed my stance with the idea that I could take donations and redistribute them to the projects we rely upon within BookStack. Since I decided to take a career break to focus on BookStack I paused any additional “donation forwarding” and instead have been using them to support myself financially. However they’re used, donations can provide extra options and flexibility to a project or, at minimum, indicate your support and appreciation for a project. 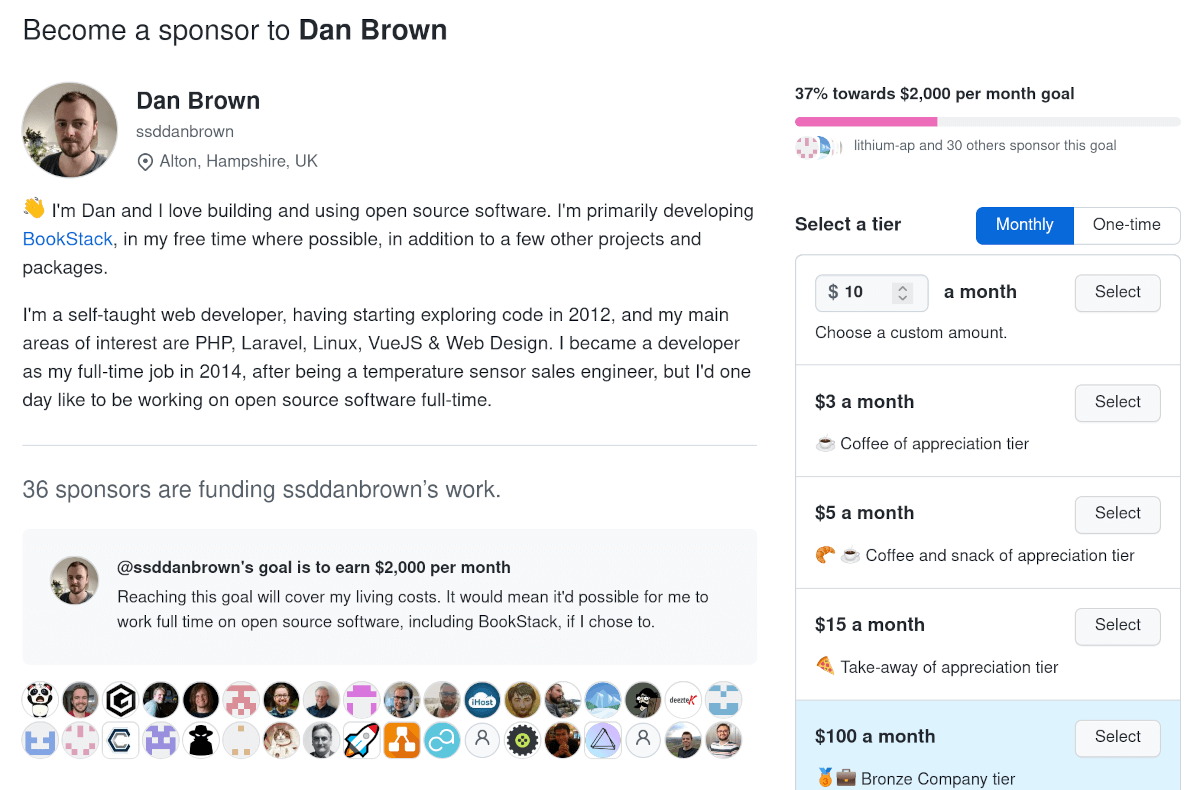 I currently accept donations via GitHub sponsors. Recently, I altered my higher-level tiers to have rewards of logo display on our website and readme. This was to give something back to our larger sponsors while trying to entice additional large sponsorships from business that can afford these levels.