Just sneaking into November is BookStack v22.11 which comes with a splendid spread of surprises intended to enhance many existing interfaces and features of BookStack. There’s no upgrade notices for this one, so let’s jump right in. Keyboard power users rejoice! It’s now possible to perform common user-interface actions via keyboard shortcuts within BookStack. By default these are disabled to prevent confusing interference, but you can enable & access your shortcut preferences via your user profile: 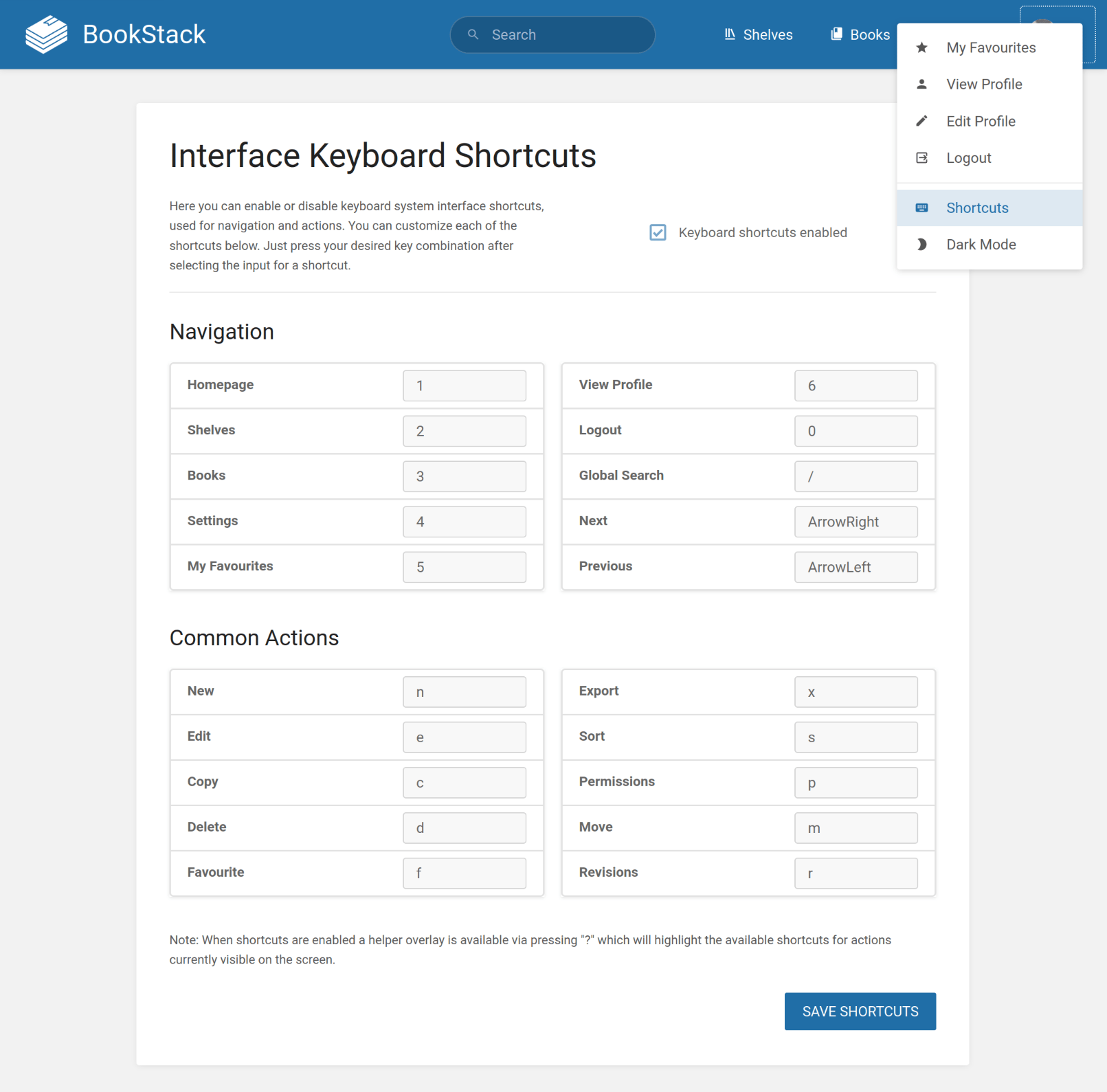 Here you can enable keyboard shortcuts for the user interface, and also fully customize the key combinations to appease your muscle memory. A large range of common actions and navigation options are available, and the exact action of these may depend on the context of your location in BookStack. All shortcut actions are tied to existing abilities in the interface. To help recall or find a shortcut you can press ? when interface shortcuts are enabled. This will show an overlay, indicating the configured shortcuts for the elements visible on your screen: 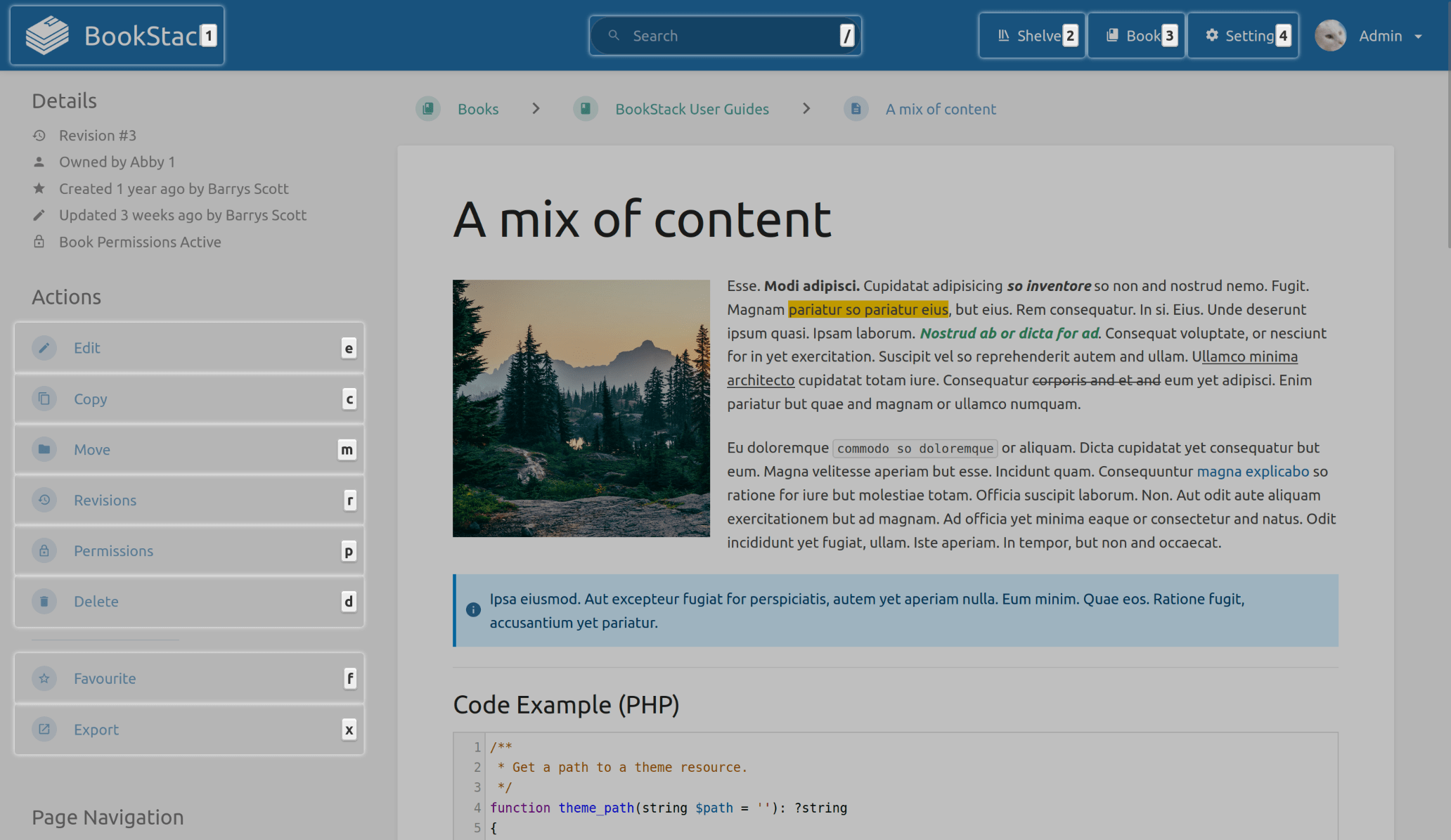 Hopefully this addition should speed of the navigation flow for many users; I certainly have enjoyed the gains while using this on my development instance.

Within modern search systems it’s now common, and almost expected, to have live feedback when performing a search. In v22.11 BookStack aims to meet that expectation by now showing live search previews in the global search box as you type:

Effort has been placed to ensure this is also navigable via expected common keyboard controls to keep up the mouse avoidance flow. If you hit enter within the search box, click the search icon, or opt to view all results, you’ll still be taken to the familiar full search page with the advanced search controls.

For this release I’ve been through and revised each of the tabular listing views within the interface and aligned them to a common refreshed design, with aligned layout and controls where possible. The main benefit this brings is that these lists are now much more mobile responsive. In addition, many of the lists have received added functionality such as new sorting controls, searching, and extra detail display: 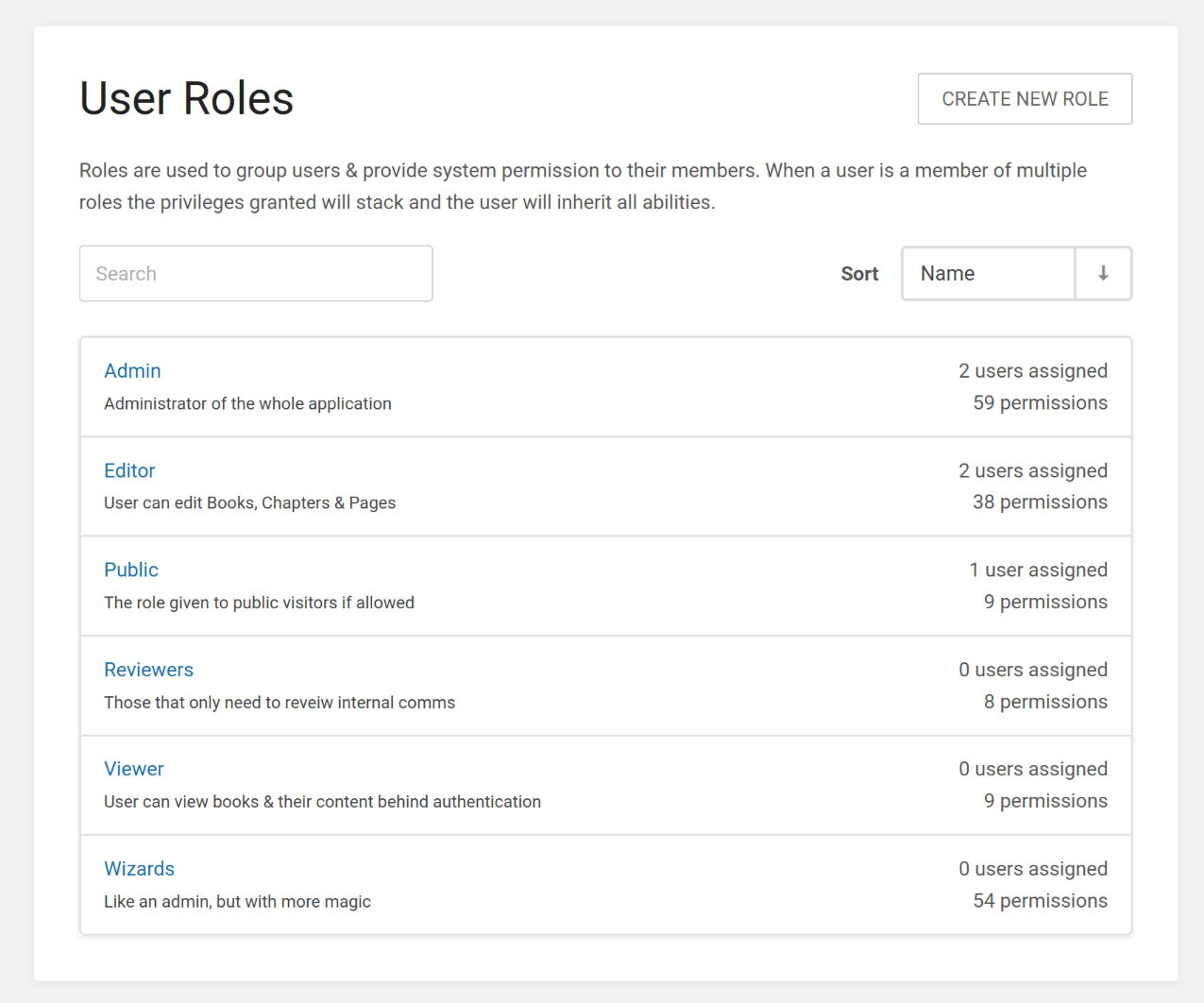 As part of some JavaScript code cleanup this cycle, I spent a fair amount of time refactoring the somewhat old markdown editor codebase. While doing that, I thought it’d be good to power-up the editor with some new features and options.

First up is the ability to cycle through callout block styles using the Ctrl+9 shortcut (Or Cmd+9 on mac). This was already available in the WYSIWYG editor, but now markdown users are not left out:

You may notice the design of the editor has been tidied a tad, with some better border alignment and reduced editor action bar buttons that have better design-aligned icons and labels hidden until hover. Added to these buttons is the new options menu: 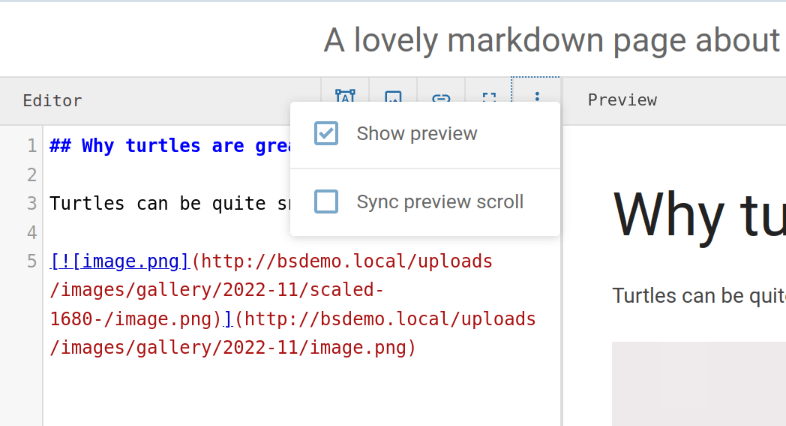 Here you can enable or disable the preview scroll syncing, or even just hide the preview pane entirely to give yourself more writing space. Along with those options, you can now drag the border between the editor and preview page to adjust the balance of each as desired. All of these added options and controls are saved as preferences to the browser, rather than your BookStack user profile, so you can retain different preferences on different devices since all these options are quite screen-size dependant.

We have another couple of code languages supported in this release: Swift and Dart. This should make many Apple and Flutter developers happy.

Updates have been applied to soften some edges and fix a couple of issues in the dark mode color scheme. The most impactful change is that BookStack will now indicate the mode in use to the browser so that browser-controlled elements, such as scrollbars, will now correctly follow the chosen option. Below is a before & after of the markdown editor in Chrome, showing how the scroll bars will now better blend into the UI. 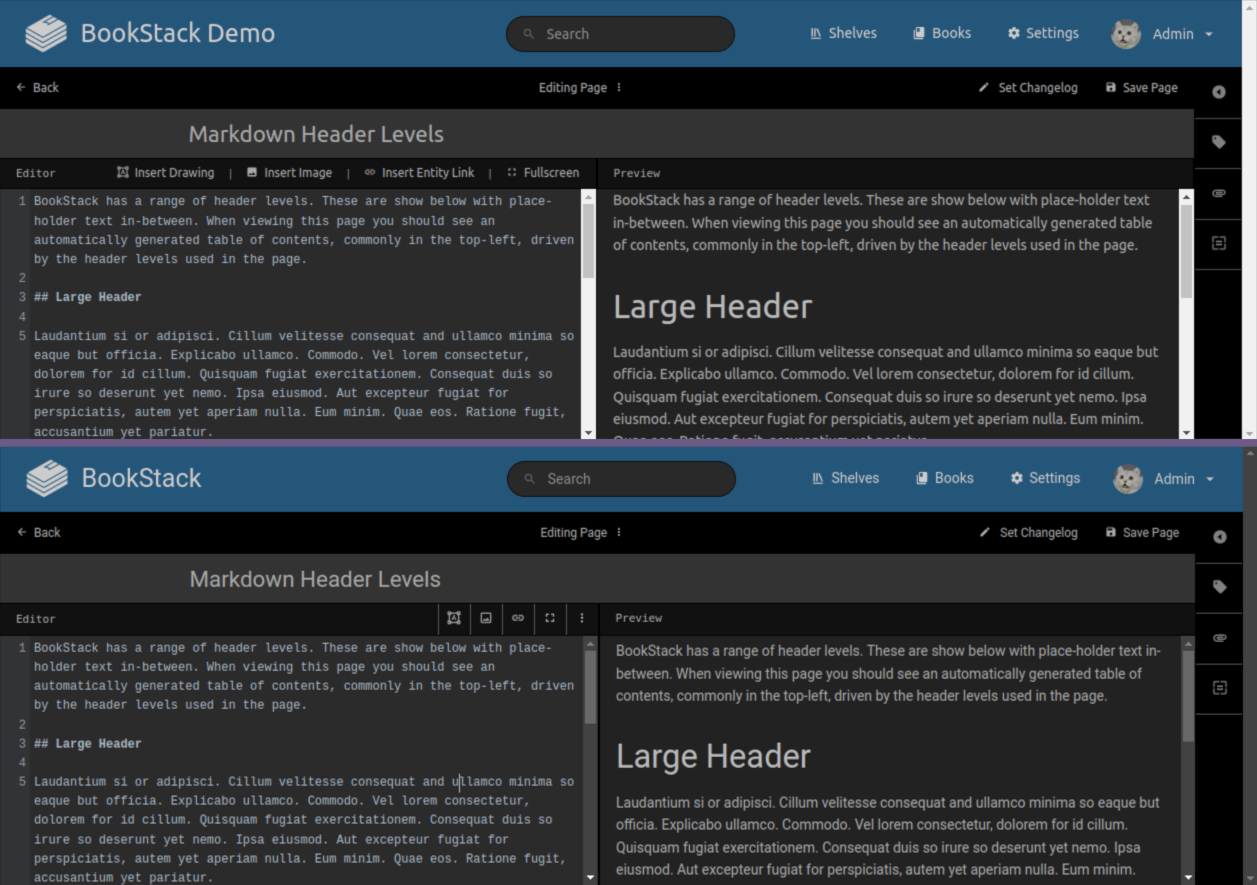 A common customization request I heard was the addition of custom text/links/content to the login & registration views of a BookStack instance. While this was possible via the visual theme system it could be quite daunting as you’d have to override the whole form section. In this release I’ve added a couple of placeholder templates for easier addition of content just above the forms. These templates are as follows:

As an example, adding the following content to a auth/parts/login-message.blade.php override: 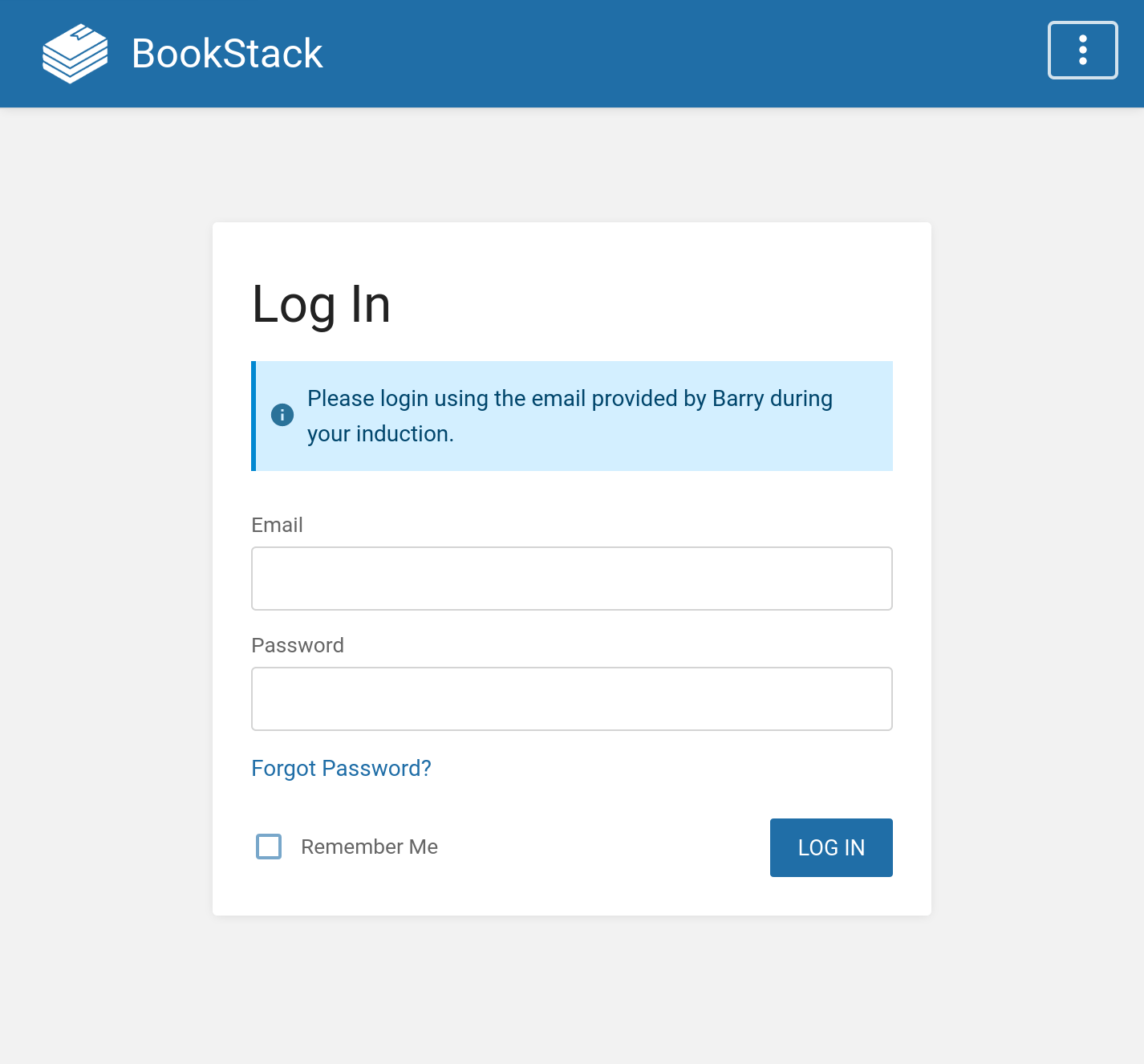 While the past month has been a nice distraction, I’ll be jumping back into the permission system for December with a hope to get all the main intended functionality wrapped up so I’m not dragging it into 2023.

On a tangent, I’ve been thinking about creating a part of this site for showing/listing/providing customizations using the theme systems. I’m often providing examples and snippets, just via a GitHub gist but it’d be good to organize these and save on much of the repeated instruction I need to provide. Could even integrate this with BookStack itself so customizations can be easily pulled down and added to an instance. My main concern with this is that, by being part of the official site, people may expect an official level of support which is against the point of them being out-of-core customizations. Would need to make it clear in the user journey about risks and support.