This spooky season supplies us with BookStack v22.10, which continues our work to improve permission control while bringing along some extra treats, without any tricks.

Since content-level (Shelf, Book, Chapter, Page) permissions were added to BookStack they’ve required, when enabled, a user to manage permissions for all roles in the system. This can often be unintuitive, since a common use-case would be to permit or restrict a single role, but you’d be forced to manage all other roles at the same time.

This release looks to address that with a significant revision to how permissions are implemented and managed. This is what the new revision view looks like: 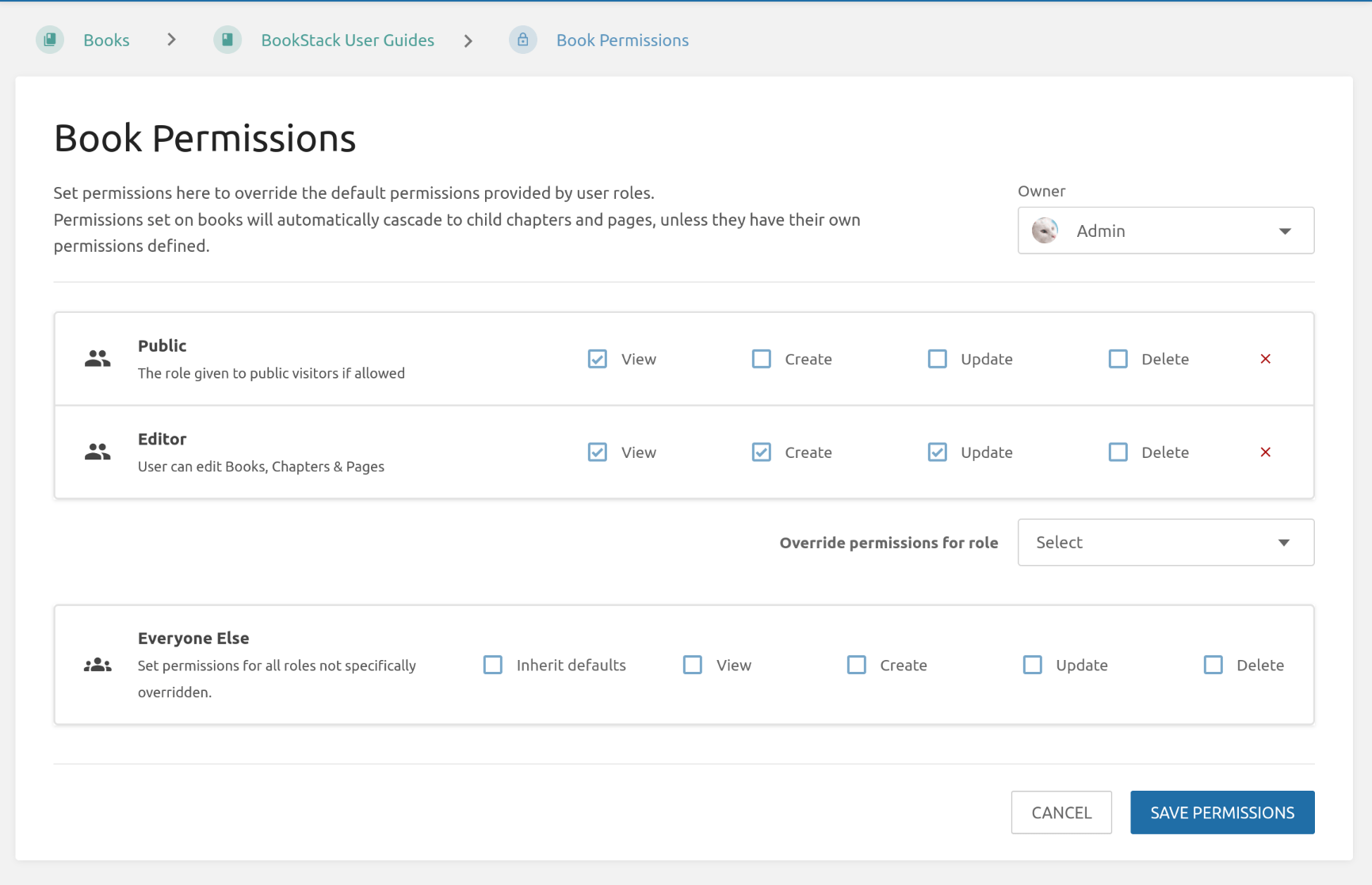 Content permissions are no longer an “all roles or nothing” scenario. You can now add individual roles to override, so you can manage just the roles you need to work with. Any roles without specific permissions defined can be managed by the “Everyone Else” option shown towards the bottom of the view. By default this will be set to inherit default role permissions, but you can override this to set new baseline permissions.

Overall these changes should make permission management much simpler for existing use-cases, while making possible some new useful permission configurations.

While the REST API provided book detail via the /api/books/<id> book read endpoint, you’d have to also call two other endpoints to form a view of the chapters & pages within the book, and even then you’d need to apply additional logic to build the content structure and ordering aligned with the BookStack interface.

To ease this, the book read endpoint will now return its child chapters and pages, ready ordered and nested as what be seen within the BookStack UI, on a contents property like so:

During this release cycle I spent a little extra time on cleaning up some existing parts of the codebase, specifically:

I’m highlighting this rather subtle change as an example of spending time to make the little things better for users. Upon our upgrade to TinyMCE 5 for the main WYSIWYG editor, it was reported that the new table toolbar icons could be hard to read at a glance. After some discussion to explore the issues, and some trialling of options, I spent an hour or two playing with the original icons to tweak spacing and sizing to boost legibility where possible. Here’s the result, with the old icons on the top, and the tweaked icons below:

While quite subtle, hopefully this should be notable improvement when glancing at them during editing.

We added the ability to copy books late last year in BookStack v21.12. Something missing from the copy would be any relations to shelves that the original book sat upon. As of this release, copying a book will now also copy its shelf relations, as long as the user performing the copy has permission to edit those shelves (Since they’d effectively be altering its content).

Within the WYSIWYG editor it’s always been tricky to edit code blocks on mobile, since it’s usually done via a double-click which is often not possible on mobile browsers. This wasn’t much of a problem before since the code editor popup was very mobile unfriendly anyway but, with recent improvements to editing code its now more likely that users may edit code on such devices.

To help access code blocks for edit, a toolbar will now show when a code block is selected with an action that will open the block for editing:

Code block highlighting support has been added for MATLAB, or GNU Octave, syntax. Along with this, both “MATLAB” and “Octave” are now selectable languages in the WYSIWYG code editor:

This release adds the language of Greek! A massive thanks to @Gr-DigiLady for their great effort in providing the language addition.

Our usual splendid super scribes have continued their solid work to provide us with the below translation updates since the original v22.09 release:

Since this release cycle was consumed by permissions management, I feel like taking a break from permissions for a month to focus on something else. I’ll dig into the issues list and maybe check in with those in Discord to find something fun to work on. May result in a release comprised of smaller-scope improvements.