For July we have what could be considered a “stepping-stone” release since it marks the start of some underlying permission system changes but it does bundle in a rich set of system enhancements & minor features. Let’s jump right in.

A fair amount of time this release cycle went into reviewing and refactoring the permission system. This is ahead of adding future planned permission features, as I thought it best to address performance before building upon our current system any further.

With a lot of performance profiling, some significant slow-code pain-points were addressed. Upon these, one of the largest performance hindrances was the due to the vast amount of permission data BookStack was generating upon changes.

For context, within Bookstack role and content permissions are calculated and flattened for simpler and more performant database queries when searching & viewing content. These are generated upon certain permission-affecting actions (role creation, content creation, permission changes, book sorting, etc.). The number of pre-calculated permission could really add-up; On a full system basis the count of such permissions would roughly be:

On a large system, the quantity of pre-calculated permissions could really stack up, and just the time to insert all of this data into the database could really slow things down.

In this release, this pre-calculation is now only done for ‘view’ permissions, removing create/update/delete permission handling as part of this. This change can often bring a 4x speed improvement for many system actions. It may also provide a slight boost in general system view-usage performance.

These changes have meant that some views have had to change slightly. In some areas, such as the move-page view, we’d only display chapters and books that the user would have permission to move into. Now, we’ll show all visible chapters & books but add a warning where permission is lacking: 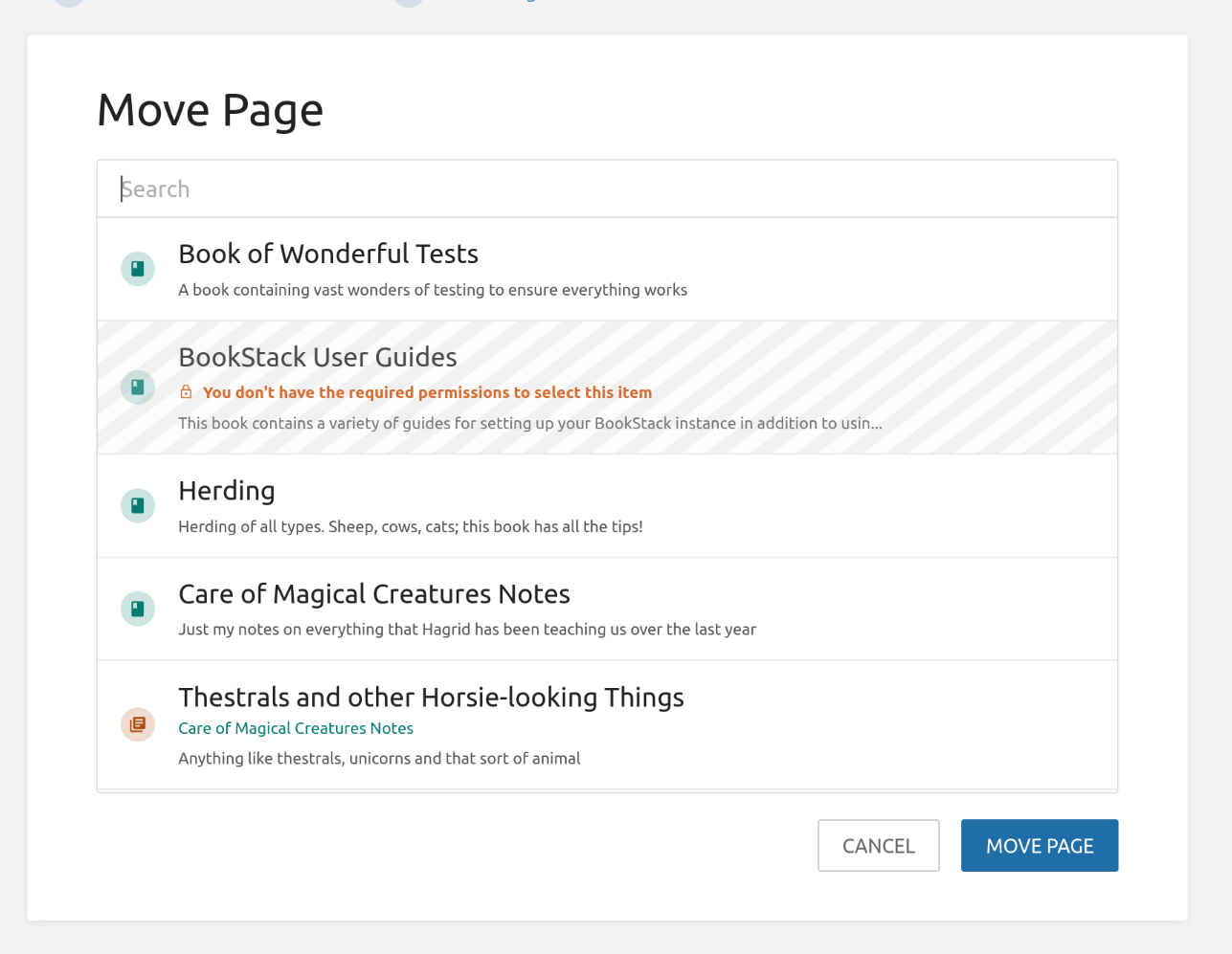 There’s a high chance that the future desired permissions features will negatively impact performance so we’ll continue to look for performance increasing opportunities to level out these impacts where possible.

A little attention has been given to shelf-edit/create view to slightly enhance management of assigned books. Book list items now have nicer hover and cursor interaction styles, and a drag handle is shown to make it clearer that the books can be dragged around and re-ordered as desired.

A search bar has been added to the available-books-list so you can quickly find a specific book, especially handy in larger instances with many pre-existing books you’d have to filter through. This list is now sorted by name to make it easier to read through, even without using the new search.

The WYSIWYG code editor received significant changes in the last feature release. Upon feedback, it was evident that usage efficiency may have been hindered when it comes to selecting the code language, especially when the desired language is in the latter part of the code list, and hence off-screen by default.

To remedy this, and to hopefully achieve a more efficient experience than ever before, we’ve added the ability to favourite code languages: 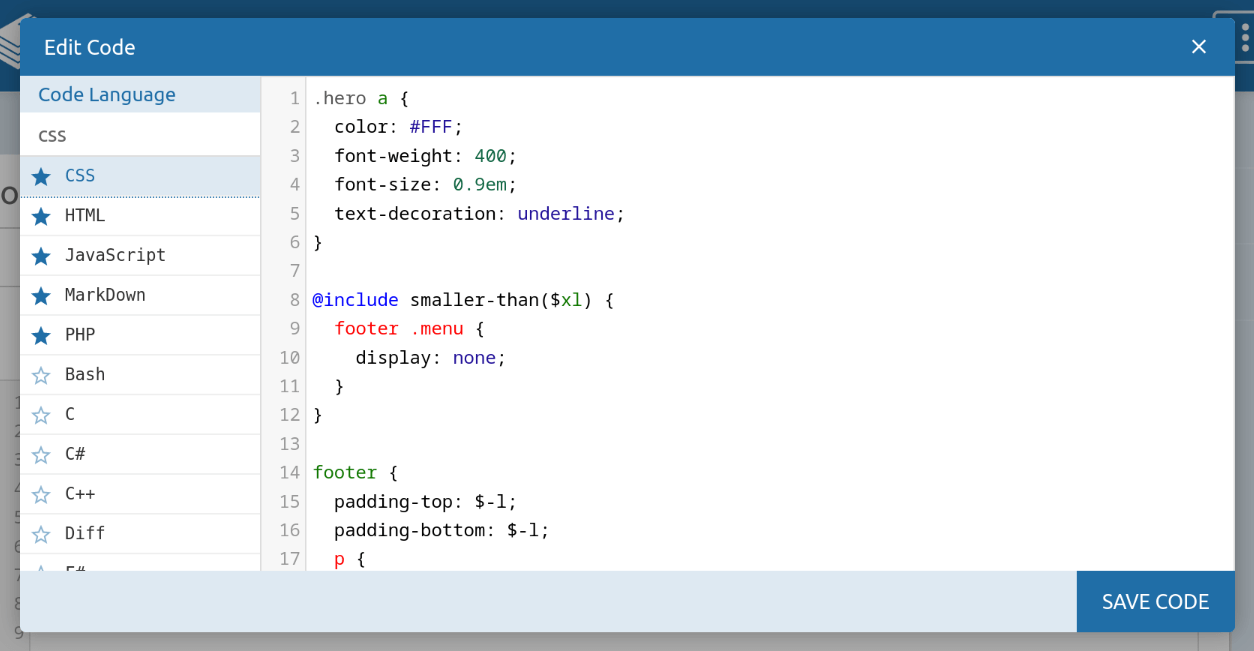 Favourite languages will be automatically sorted to the top of the list, and these preferences will be stored against your BookStack user account so the favourites remain personal to you, and consistent across browsing devices.

Sort a Book from the Chapter

Within our BookStack Discord server it was noticeably common for users to ask “How do I re-order pages within a chapter?”. A past attempt was made to add a specific chapter-sort view but this never progressed to completion. As a user-experience-focused workaround, a “Sort Book” action will now show when viewing a chapter, where permission permits: 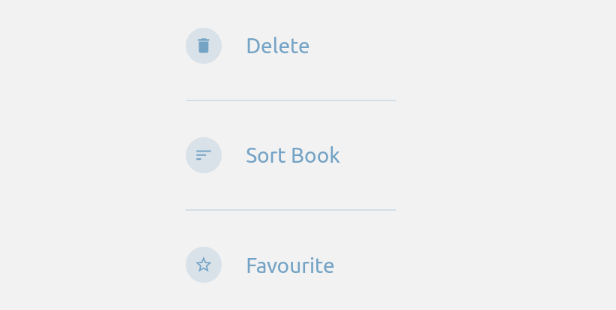 BookStack stores IP addresses within its audit log to provide admins with visibility of where actions are taking place from. In some use-cases, this may be considered as storing personal data of others, thus problematic from a privacy perspective. To address such cases, you can now set an IP_ADDRESS_PRECISION option in your .env file.

This is a numeric option, defaulting to 4 (Show entire IP address), which effectively states how many octets of an IPv4 address should be shown, or how many pairs-of-chomps of an IPv6 address should show. As an example, the audit log preview below reflects usage of IP_ADDRESS_PRECISION=2:

A couple of new shortcuts have been added to both page editors:

The addition of these should provide less reason for needing to take your fingers off your keyboard and therefore remain in the writing flow.

Tags are now much easier to use for design customization within BookStack. Upon viewing of any item with tags, BookStack will format those tags into CSS classes applied to the <body> element of the page. As an example, a tag name/value pair of Priority: Critical will apply the following classes to the body:

This can then allow very easy content-level customization through the use of tags, with only the addition of some custom CSS in the “Custom HTML Head Content” setting. For example, you could apply a Layout: dual tag, along with a .tag-pair-layout-dual .page-content p {columns: 2} CSS rule to make paragraphs dual-column on those tagged pages.

Some normalization is applied to generate the classes. See our docs section about tag classes for full details.

Our Logical Theme System, used to customize server-side functionality, has received a new activity_logged event. This allows you to run custom logic upon any system-logged event such as those visible in the audit log.

This can be very powerful, as it provides a lot of visibility into system actions. As an example, the below customization would write out the HTML content of a page to the local filesystem, upon any update or create event:

There have been some significant underlying updates done to libraries used in BookStack. Hopefully these should have little impact to usage while providing some enhancements. Notably:

A usual shout-out again to our wonderful wordsmiths of different languages that have provided translation content since the original v22.06 release:

For the next release I think I may take a detour to look at tracking cross-content links within BookStack for better referencing and url-change handling. This is after writing & discussing my URL scheme proposal which I think may be the wrong approach, so I’d like to explore a more direct and pragmatic option.

I’ll continue to keep an eye on the permission system, and possibly perform another round of performance improvements there, before diving deeper into the new feature additions in that space.