Today we release BookStack v21.08, which brings along multi-factor authentication support in addition to a number of other nice features. Within this post we’ll dive into some of the biggest new changes since the v21.05 release.

Multi-factor authentication (MFA) can now be enabled for user accounts in BookStack. Two different MFA methods are available in this initial release of the feature:

MFA can be enabled by any user accounts in the system. It can be enforced at a per-role level via a new “Requires Multi-Factor Authentication” checkbox found when editing a role: 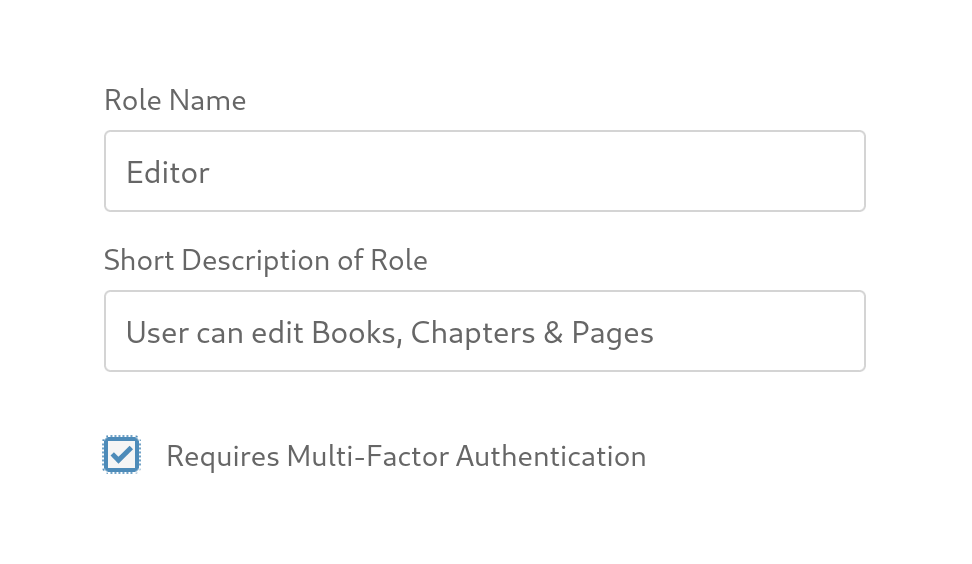 When required, users will be forced to setup at least one MFA method upon next login. For those with at least one method configured, the system will require an MFA method to be used upon login:

To help in the scenario where someone may lose their MFA credentials, a new system command has been added which will clear all MFA methods for the given user:

This feature was more effort than expected, partially due to needing to refactor how authentication is performed within BookStack, but it should provide a significant benefit to instances that house sensitive content.

In addition to the PDF, plaintext and HTML export options, you can now export pages, chapters and books as markdown:

For pages that have not been written in the markdown editor, we’ll attempt to convert the underlying HTML content to markdown. This new markdown export option has also been added to the API. Note: This format does not contain the image data like the HTML option since readability and cleanliness have taken priority.

A new “Export content” role permission has been added to BookStack. This will be given to all roles by default upon upgrade. This new permission allows admins to control who can see and use the “Export” option that’s available via the API or on any page, chapter or book.

A new accessibility feature was added in v21.05.3, providing a “Skip to main content” link on the first element of focus on the page. This link is not visible by default but will appear when focused upon, typically by hitting tab after landing on a page.

As of v21.05.1 it’s now possible to upload images via a page’s HTML content. To utilise this, the image just needs to be provided as a base64 encoded data URI within the src of an img tag like so:

Upon POST/PUT of this data, BookStack will extract these images out to their own files, as if they had been uploaded via the UI. This is not yet available for markdown content.

Within BookStack v21.05.2 we added the ability to open/reference attachments without forcing the file to be downloaded. This can be useful for files that your browser may support like images and PDFs, where they could then open in their own tab instead of being downloaded. 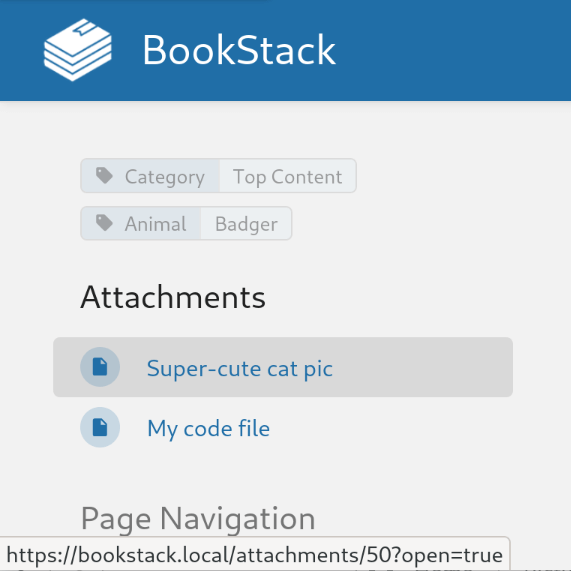 This feature is fairly hidden. You can either Ctrl/Cmd+Click the attachment link or add ?open=true to the end of any current attachment link. I’d like to build this option into the interface at some point to make it easier to find & use where desired.

This release brings a new language option of Lithuanian! Big thanks to @ffranchina and their translators for providing this new language.

Upon that, the below wonderful people have provided translation updates to the shown languages since the initial v21.05 release:

This will likely be my last feature release before I leave my current job and start focusing on BookStack for a while. For the next month or so I’ll just be sneaking in bugfixes and minor improvements as patch releases.

Over the last couple of releases I’ve made good progress in merging in pending pull requests, so I’ll now look to upgrade the framework of BookStack from Laravel 6 to Laravel 8. As part of this I’ll probably do some more cleanup of the codebase.

I’m not sure what I’ll be starting with once I’m working on BookStack full time. The search system is in much need of improvement so that may be the first challenge I tackle.

Header Image Credits: Photo by Dimitry B on Unsplash