Although intended to be a quick release cycle, v0.30 is now here 5 months after the last major release. Sketchy personal health, a poorly pet & a busy day-job workload, combined with constant working-from-home, have reduced the amount of time I could afford to spare working on the project but with normality somewhat returning I present BookStack v0.30 which includes an assortment of enhancements.

Before we get into the features, just a couple of important advisories:

Thanks to @Defelo it was advised that current privilege escalation situations are not made clear when applying role permissions. Any user with a “Manage app settings”, “Manage users” or “Manage roles & role permissions” system permission assigned to one of their roles could technically alter their own permissions to gain wider access. A clear advisory of these cases has been added in the UI in v0.30 but admins are advised to review which users have these permissions with the above in mind.

Thanks to @nem1989 it was found that BookStack roles would be matched to LDAP/SAML groups based upon the role display name, which is expected, but only those roles with a matching “name” value would be considered for this matching. This “name” field was redundant, and has now been removed, but it would store a cleaned version the first-set name of the role. All roles will now be considered before being matched on name which may mean that roles which did not sync before, that would have been expected to based on their name, may now start to sync.

User activity within BookStack is shown across various locations of the system but it’s always shown to a limited length. Additionally, there are some activities that havn’t been visible without database access such as item deletions.

As of v0.30 you can now see an audit log interface if you have permission to both “Manage System Settings” and “Manage Users”. This is an unfiltered list of the activities that are currently logged to the database by BookStack. Here’s how this looks: 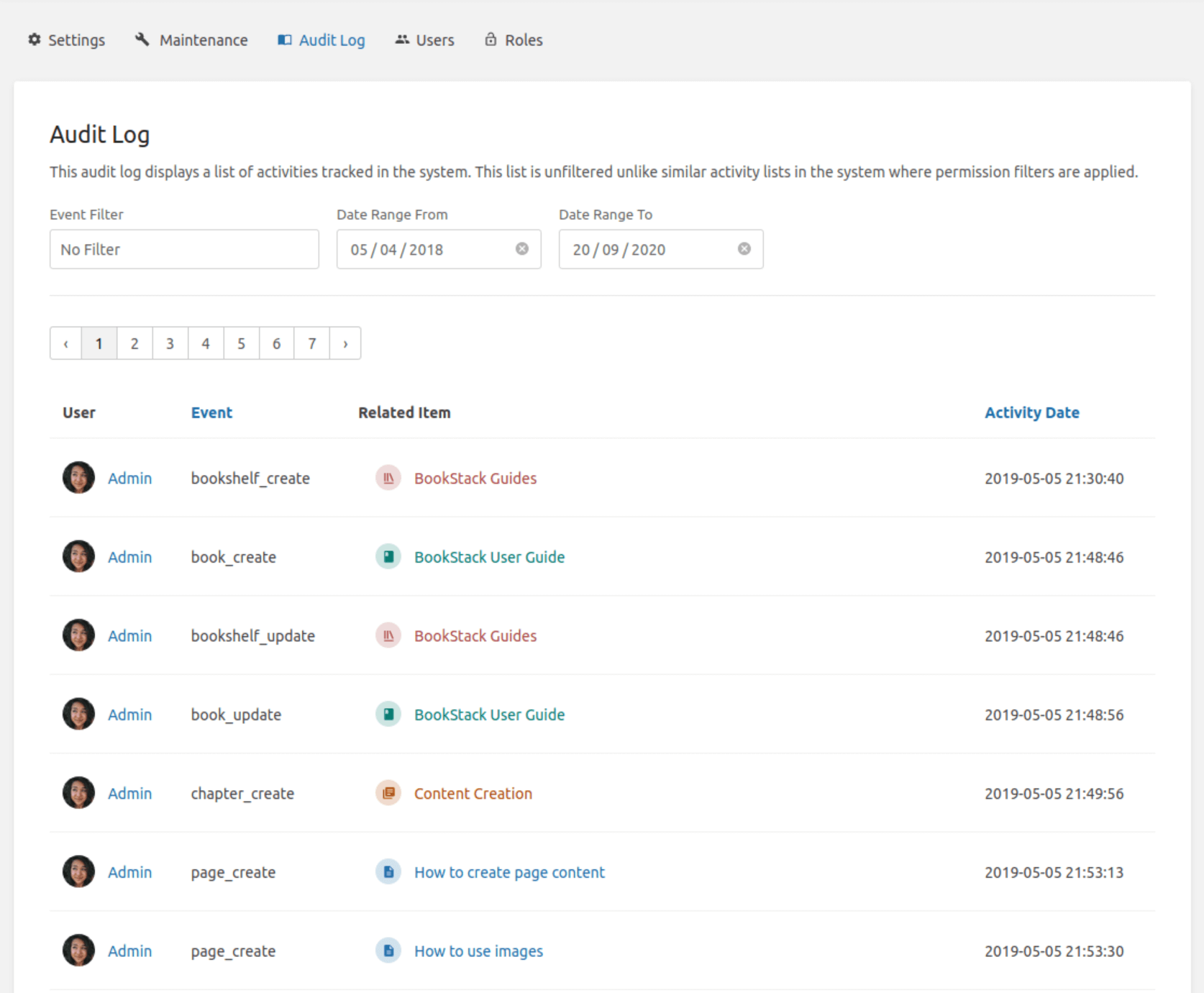 Any event that causes the popup to close will now save a copy of the contents into the browser’s session history. Within the editor you’ll see a “Session History” link, if anything is in the store, with a dropdown of times showing when code was saved. Clicking one of those times will update the editor with the code saved at that time. Note, This store is temporary and intended for short-term recovery where needed; In most browsers this data will be cleared as soon as the browser tab is closed.

The process of inserting attachments into your page content has now been streamlined. A new link button found on the attachment list, when editing a page, allows you to insert an attachment link, with the correct attachment name, into the page content with a single click.

On FireFox, or any browser when using the MarkDown editor, you can also drag the attachment card directly into your page content. Unfortunately chromium based browser’s drag+drop handling, combined with the WYSIWYG editor’s own event handling, proved too troublesome to implement this reliably for that environment.

Work continues on the API to bring us chapter endpoints in this release. As we have for Books, this includes endpoints for exporting to the same formats that we support via the standard UI.

Next up, we’ll be looking to implement endpoints for pages. If you’ve played with the API I’d love to hear your feedback in this GitHub issue.

Since releasing dark mode in v0.29 we’ve had feedback regarding some choices made in addition to a good set of bugs being reported and fixed.

When implementing dark mode I made the choice to use CSS filters to alter the saturation and brightness of imagery in the hopes it would make content sit within the theme better. After feedback I realise this was a bad decision; It’s effectively altering core user-content which should remain in control of the user/editor. In addition, these filters could massively affect the legibility of screenshots and similar text-based imagery. Use of these filters on images has been removed in v0.30.

I absolutely love Vue.js, I’ve been a heavy user of the library with it being my go-to JS framework since version 1.0 after jumping ship from Angular 1. Therefore I used it to drive some of the more dynamic elements of BookStack such as the image manager and attachments interface. Within BookStack, I try to limit JS usage where possible, looking at native back-end solutions before jumping to JS solutions. For smaller dynamic tasks I’ve slowly built up small set of “components” written in fairly basic plain JS for tasks such as handling dropdowns and complex select menus.

The trouble with frameworks such as Vue is that they ideally need to own the DOM from the point they’re attached to downwards. That leads to friction with the little JS “components” we had elsewhere as they’d either need to be re-written as a Vue component or an adapter would need to be created to “wire” the component into Vue.

As much as I love Vue, it wasn’t really needed in BookStack and we were not really using the full power of the framework. In v0.30 I’ve converted the existing Vue usages to a combination of back-end driven logic and an extended form of the plain JS components we already had. The removal of Vue brings a small reduction in the initial JS bundle download size in addition to a greater reduction of code being ran on each page load, leading to a more responsive interface overall.

As part of these changes I’ve also spent some time trying to document and standardise an approach for these plain JS components which can be seen here. I’m slowly updating the older components in the system to conform to these changes.

Unlike Vue.js, I’ve never really liked Webpack due to the many hours I’ve wasted trying to integrate Webpack based build systems into existing projects. That said, I’ve always respected the Webpack project and it’s developers for the developed ecosystem and the sheer amount Webpack is able to do.

As of v0.30 we have removed Webpack from the development flow of BookStack. Instead we’re now using SASS directly for CSS builds (Thanks @timoschwarzer for swapping this to the newer dart-sass during this release cycle) and using esbuild for JS building & bundling. Our build systems are all simply npm scripts which can be seen here.

Thanks to @benrubson it’s now possible for failed login events to be logged. This will function for both the standard email & password login as well as LDAP logins.

To enable this you simple need to define the LOG_FAILED_LOGIN_MESSAGE option in your .env file like so:

The optional “%u” element of the message will be replaced with the username or email provided in the login attempt when the message is logged. By default messages will be logged via the php error_log function which, in most cases, will log to your webserver error log files.

As always our terrific translating tribe continue to provide their awesome efforts as this release brings updates to the below languages by the following fantastic Crowdin & GitHub members:

For v0.31 my main focus will be adding pages to the API which will be a bit more involved than the other endpoints we’ve added so far. That would complete the core API endpoints I wanted to initially implement; After that I’ll allow issues to be created to request other API endpoints that people may need.

Now that I’ve added the audit log I’d like to expand the activities we track to include things such as setting changes, logins & user creations so that admins will be able to review administration operations. As part of that work I’ll try to start a deeper scoping into how content notifications could fit into the application.

I’ve opened a proposal to implement proper “Owner” controls, which can be seen here. At the moment the permission system has the ability to apply different permissions for someone’s own content but this currently relates to the creator. This causes issues in scenarios where someone would create elements, such as a book, on behalf of another user. These changes would mean a “Owner” user would be assigned to each item, the creator by default, but that “Owner” could easily be re-assigned where required. I’ll likely implement this as part of the next release cycle unless there are any major concerns.