It’s now possible to define page templates that can be used to speed up and standardise the creation & modification of page content:

Templates are simply pages that have been marked as a template in the editor sidebar. Once marked as a template it will show as an available template to any other users that have view permissions of that page template. Clicking the template “card” will replace the your existing editor content, if any, with the page template content. There are also buttons to insert the template content at the top or bottom of your page. Alternatively, It is possible to drag the template “card” into a specific area of the the editor. These actions work in both the default WYSIWYG editor and markdown editor. 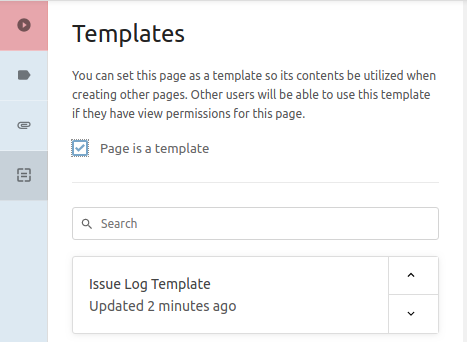 Since templates are essentially just specially-marked pages, templates can be organised within books and chapters like any other page. An approach many admins may want to take is to create a new “Templates” book with restricted permissions so anyone can view, and therefore use them as templates, but only certain members can edit. A new “Manage page templates” role permission is now available to designate which roles have the ability to mark a page as a template.

Accessibility on the web is important yet it is often overlooked; It was definitely something I overlooked in BookStack. For this release I have invested some time learning how we can make BookStack easier to use for those with disabilities. Here’s an overview of what’s changed:

There’s still some work to be done, especially when it comes to the page editors, but this release marks a good start in making the project accessible to all. The project readme on GitHub has been updated with the accessibility standards we’re aiming for along with some details to show that we’re open to issues regarding accessibility.

A new way to onboard users to BookStack has been implemented. When creating a user, a new option is available to send the user an invite email:

This option is selected by default; Unticking it will show the password fields if you’d prefer set the password manually yourself. The new user will then receive an email which will take them on a flow to set their own password and gain access to your BookStack instance. 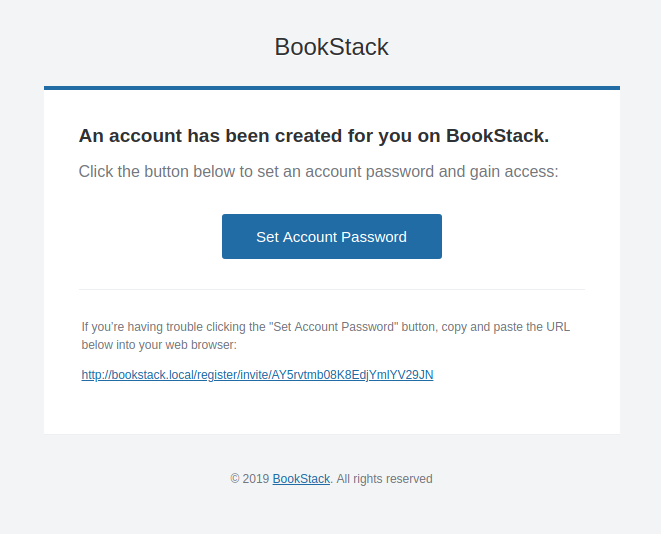 This new flow should enable admins to onboard new users in a more efficient and secure manner compared to creating accounts then having to share the password via other means.

To make it easier to get started with BookStack development work, A docker-compose setup has been added to the project. This setup will start a database, start the app and build the JavaScript & CSS assets on change. Note that this is designed for development use only, Not a way to run BookStack for actual use.

Details on using this docker development environment can be found in the readme here.

Thanks to @timoschwarzer for this feature.

This release includes a lot of under-the-hood changes that work towards a more efficient system in addition to a cleaner codebase.

On the front-end, jQuery has been removed and any of the jQuery-reliant libraries that we were using have been swapped to either native elements or lean alternatives. This means that if you have added any jQuery dependant custom code you’ll also need to bring in the jQuery library yourself too.

The way many theme colors are implemented has been revised to use CSS variables. This makes it much easier to customize the colors used for pages, chapters, books & shelves. This is an example of a customizing these colors, which can be placed directly in the “Custom HTML Head Content” setting in BookStack:

The system used to generate URLs has been re-written to better extend the Laravel framework instead of overriding it. The changes here should lead to more reliable URL generation, especially in situations where BookStack redirects you to locations you had visited or tried to visit before (Login redirects or back buttons).

BookStack previously had the folder config/ which contained internal framework configuration that was only intended to be modified by BookStack, not by end users of BookStack. This folder has been moved to app/Config/ so it’s not instantly visible on install to help avoid confusion in where configuration changes should be made.

The file storage system has been updated to allow images and attachments to be stored in separate locations. You can use the below new .env options to configure this otherwise the STORAGE_TYPE option will still control both by default.

The way translated text is passed to dynamic JavaScript elements has changed so that these are inject directly into the page, instead of there being a background request to /translations on each page load.

The markdown editor preview display has been re-written so that content is rendered within a sandboxed iframe that does not execute JavaScript. This is to help prevent malicious user-inserted JavaScript from running when the editor is opened.

Big thanks to members of the community for supplying translations. Since the original v0.26 release we have received the following translation updates:

Thanks to @TimmKroe A BookStack Discord server has been created here:

If you want to chat about BookStack or want to ask something without creating a GitHub issue feel free to jump into the server.

Just as an advanced warning we’ll likely be upgrading Laravel, the framework used in BookStack, to version 6 which will cause a change in the PHP version requirement for BookStack. The minimum required version of PHP will be 7.2 compared to the current minimum requirement of 7.0.5. We’ll be putting some documentation together to help manage this change but it will likely mean some manual config changes for many BookStack users. Discussion about this can be found here.

Version v0.28 will start the work to implement the API, which is the next item on the Road Map to tackle. Don’t expect full API completion, It’ll be more about setting the underlying framework & systems to support it along with maybe a single set of endpoints so we can essentially release a preview to get feedback before expanding it out fully.

An initial SAML auth implementation has been provided by @Xiphoseer so that will be reviewed and hopefully merged in for the next release.

I’ve been thinking about migrating the application styles from SCSS to standard CSS within blade template files. You can find my thinking on this here. This idea would then be to do something similar in the future with the JavaScript code-base to really open up the customization and tweakability opportunities to those that desire it.