Today is the launch of BookStack v21.04 which is our next feature release after Beta v0.31. For this release we’re dropping the beta and changing our version scheme as detailed below. This release has no single major feature but is instead focused on a range of fixes, improvements and community contributions.

As mentioned above, after collecting some feedback on GitHub, I’m dropping the beta status from any versions and release notes. In terms of stability and code, nothing really is changing. BookStack has been fairly stable for a while now, and I’ve always attempted to ensure a stable upgrade path on releases. My primary reason for keeping the beta status was really to omit a little extra liability, and I was hesitant to label any release as v1.0 since I could not define a reasonable criteria for v1.0 that I’d be happy with. The beta status was causing issues for some people, where their hosting/platform would not provide any support due to the beta flag.

In terms of version numbers, we’re jumping from Beta v0.31 to BookStack v21.04. As mentioned above, I couldn’t really define a v1.0 so we’re skipping right over it and using the Ubuntu versioning system as inspiration. BookStack versions will now be in the format of v<2 DIGIT YEAR>.<2 DIGIT MONTH>[.<OPTIONAL PATCH DIGIT>]. As an example:

That change is technically compatible with the old versioning, while now providing context about the release date within the version. This can be extremely useful when people reference their BookStack version as it’ll instantly provide context of release date without needing to look that up.

Some scenarios, such as those for GDPR compliance, require links to be shown on every page. To support these cases, You can now add custom footer links to your BookStack instance via the settings page: 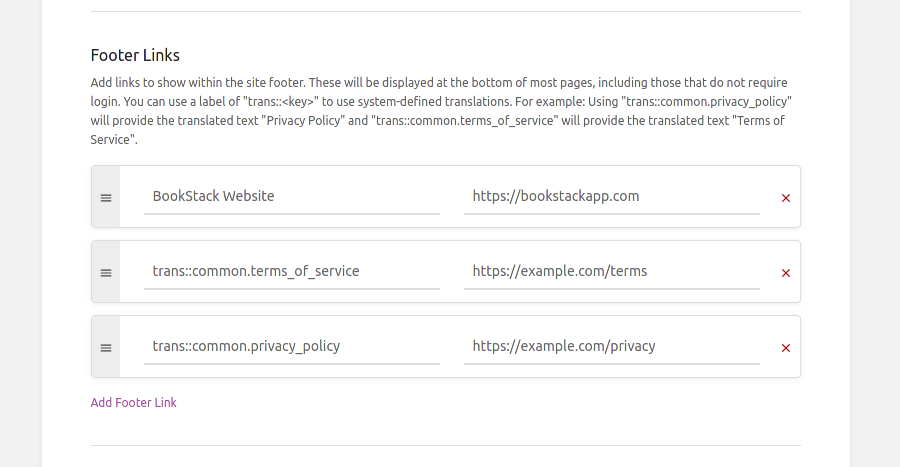 You can specify the URL and text for each link. The description of the setting details how you can use the BookStack translation system to automatically translate some common phrases such as “Privacy Policy” and “Terms of Service”.

Once set, these will be shown at the bottom of almost every view including those that are public such as the login & register pages.

Thanks to @james-geiger for pushing this forward and providing an initial implementation of this feature.

Within search inputs, and on the search page, it’s now possible to search for content belonging to a specific owner:

Thanks to @benediktvolke for implementing this feature.

Using the existing theme folder system, it’s now possible to customize back-end PHP functionality without altering core project files. To set this up you’d create a functions.php file within your theme folder, in which you can use specific events we expose. For example:

This system is documented within the project source itself, and can be viewed on GitHub here.

The intention of this system is provide a mechanism for people to implement back-end functionality that’s not suited to be in the core project.

Note: This system is considered to be in beta for this release version as I’ll be gathering feedback on this initial implementation to potentially make further changes if needed.

Sort options have been previously available within the books & shelves listings. This update brings sort options for viewing books within a shelf. 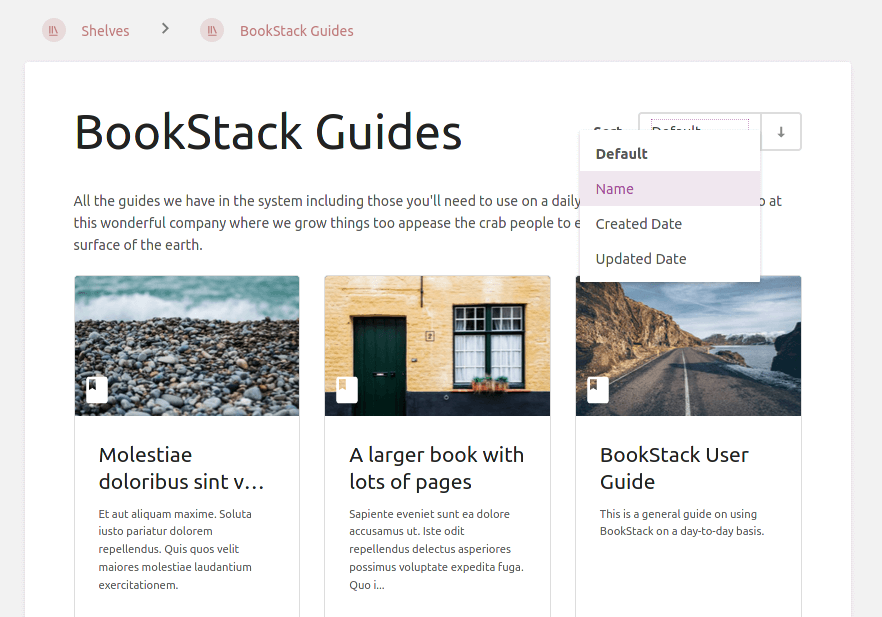 This defaults to the user-defined order, managed via editing a shelf, but this allows custom ordering by name, updated date or created date. Sort ordering changes are saved to the current user session.

Thanks to @guillaumehanotel for providing the initial implementation for this feature.

The audit log has been updated with the ability to search for activities created by a specific user in the system: 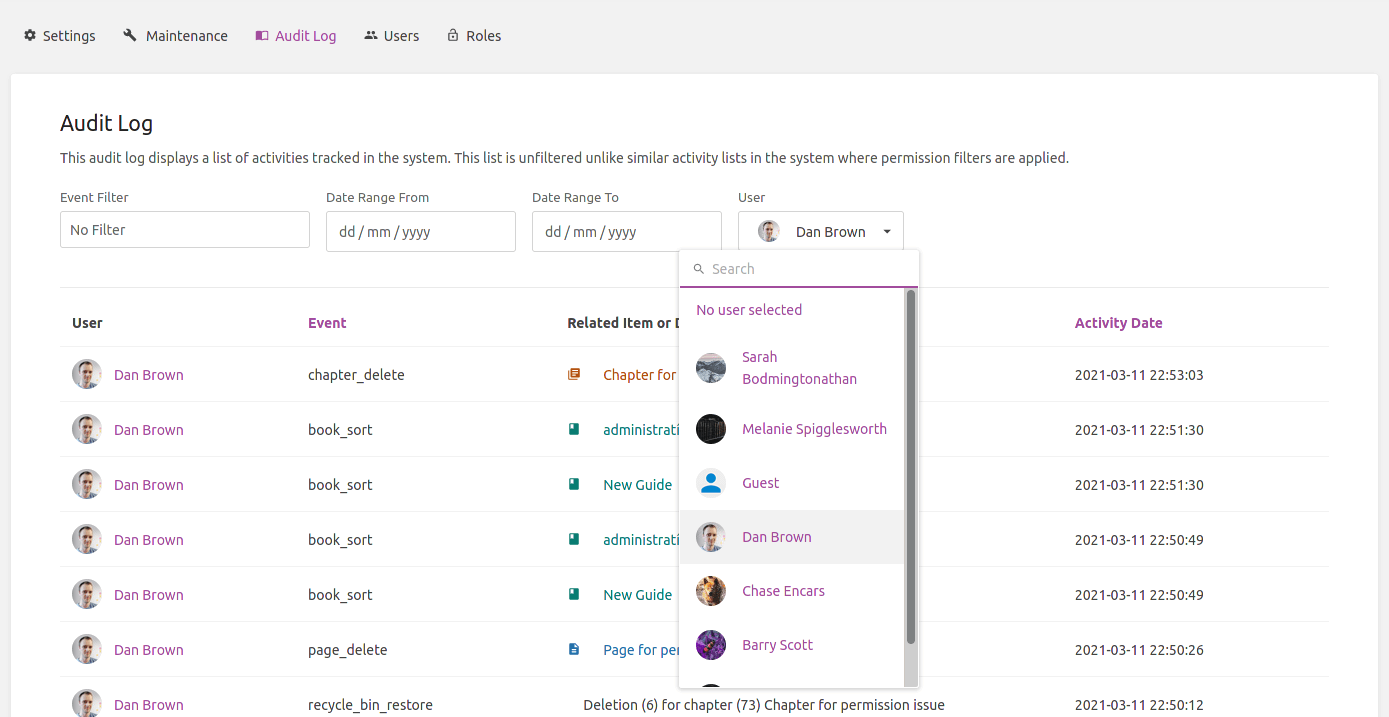 A healthcheck endpoint is now included in the system which can be useful in automated and high-availability scenarios. This endpoint will perform some simple checks on the database, cache & session, then return the status of each as JSON:

Proper TLS support has now been added to BookStack. This can be enabled by adding LDAP_START_TLS=true to your .env file. When enabled, BookStack will ensure a TLS connection is made. If the TLS connection fails for any reason then an error will be thrown.

Thanks to @Body4 for pushing this forward with a contributed implementation.

PHP 8.0 is now supported by BookStack. This was a fair bit more involved than previous PHP 7.x support due to PHP 8.0 being a fairly big release which included a fair few breaking changes. Due to dependency support, we’ve had to bump the minimum supported PHP version to PHP 7.3 from 7.2.5.

It’s now possible to set dark mode as the default visual option for an instance. This can be set by adding the following to your .env file:

Note that this may be overridden by any user’s session or set preference.

This release brings an additional 5 new language options for users to select. Note, Some of these are still in progress so may be somewhat incomplete. Massive thanks to the names listed here for their fantastic work:

In addition, we’ve also had a wonderfully large amount of translation updates since the original v0.31 release. Again, A thanks to all names listed below for their incredible efforts:

For the next release I want to continue to resolve some of the pending pull requests on GitHub. For a few of these I’ve been waiting until I can build a back-end customization system, as done in this release, so some requests will be directed to use that system instead of including changes in core, which should give the system a good initial test. I hope to work through the outstanding SAML issues if I can get a working active directory set-up to replicate and test.

During this cycle I’ll be starting to think about the next step on the roadmap, where we’ll be reviewing the editors used in BookStack. There probably won’t be any coding for the feature during this cycle but I’ll be raising proposals and/or RFCs to plan this out.

MFA is an subject that would be good to takle soon but working on auth components can get tiresome, especially as this is an area where people often need configurability.

Since we’ve now bumped the minimum required PHP version to 7.3, I’ll probably start upgrading the codebase from Laravel 6 to Laravel 8 so we gain some new features to play with.